Only one in every forty new jobs since the recession is for a full-time employee, says TUC

The share of UK jobs accounted for by full-time employees fell during the recession and has failed to recover, according to new analysis published today (Wednesday 12th November 2014) by the TUC.

While new employment figures due to be published today are expected to show an overall increase in employment, they are not expected to substantially reverse the reduced share for full-time employee jobs in the labour market.

The TUC recognises that part-time and self-employment are both important options for many people. However, despite recent economic growth the number of part-time employees who say they want full-time hours is still twice what it was before the recession at 1.3 million people.

The TUC believes that the rise in self-employment is at least in part a result of people who are unable to find employee jobs being forced into false self-employment – an exploitation of workers used by some companies to evade taxes and avoid respecting employment rights and entitlements such as holiday pay, sick pay and pensions.

“While more people are in work there are still far too few full-time employee jobs for everyone who wants one. It means many working families are on substantially lower incomes as they can only find reduced hours jobs or low-paid self-employment.

“The Chancellor has said he wants full employment, but that should mean full-time jobs for everyone who wants them. At the moment the economy is still not creating enough full-time employee jobs to meet demand.” 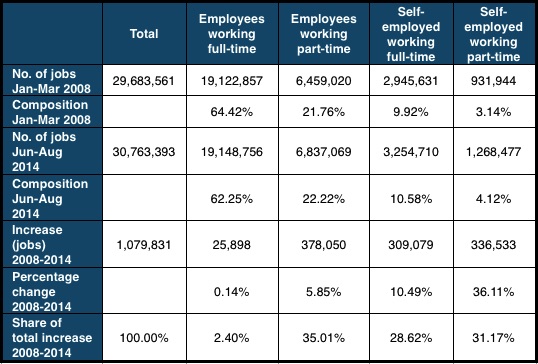