The service sector is continuing to feel the benefits of the economic upswing with growing optimism, business volumes rising briskly and firms taking on more staff.

That’s according to the CBI’s latest quarterly Service Sector Survey.

In the three months to May, firms were increasingly confident about the business situation, with optimism rising at the fastest rate since the start of the survey in 1998, while business volumes rose again, marking a full year of growth. The survey of 151 firms also revealed that companies have continued to take on more staff and increased expenditure on training.

“With a full year of growth under their belts, service sector firms are more upbeat than they have been for a long time.

“The recovery continues to strengthen with both consumer and business-facing firms taking on more staff and investing in training and IT.

“But a rising number of firms, particularly in business and professional services are having problems finding the right staff. This survey identifies a skills gap as a growing constraint on business expansion in the sector over the year ahead.”

Consumer services – hotels, bars, restaurants, travel and leisure firms and others in consumer-facing sectors – regarded levels of business to be comfortably above normal. Business volumes rose strongly once more and growth is expected to pick up further in the coming quarter. Despite a sharp rise in total costs, the profitability of these firms improved at the liveliest rate since late 2006. Numbers employed grew strongly for the third consecutive quarter and firms plan to boost spending on training/retraining staff over the next three months at the fastest rate since November 2007.

The business and professional services sector – which includes accountancy, legal and marketing firms – saw growth in business volumes edge up, to its fastest pace since 2006. Firms reported their level of business to be above normal for the first time since November 2007. Average selling prices rose following a prolonged period of falling or stable prices, while the rise in profitability gathered pace from the previous quarter. Headcount has now risen steadily for a full year, while growth in expenditure on training/retraining expanded at the fastest pace since February 2006. In the coming quarter, firms expect to raise headcount further and continue to invest heavily in staff training.

Looking ahead, consumer-facing firms appear more bullish about their prospects than business & professional services firms, which expect the pace of growth in business volumes and values to moderate. Firms in both sub-sectors expect their businesses to expand over the next year, though to a lesser degree than the last quarter. Consumer services firms plan a strong increase in IT capital spending over the next 12 months, driven mostly by a desire to replace existing capital. Inadequate net returns were seen as the single biggest factor likely to limit capital expenditure over the next year, while the proportion of respondents citing demand uncertainty dropped to its lowest level since May 2006.

Business and professional service firms will also focus capital expenditure on IT. Replacement and efficiency improvements remain the most important investment motives, but capacity expansion has gained notably in importance (with citations rising well above their long run average). As with consumer services firms, they are less worried by demand uncertainty than at any time since the financial crisis.

The Service Sector Survey was conducted between 25th April and 14th May 2014. 101 Business and Professional Service firms and 50 Consumer Service firms responded.

The key findings are: 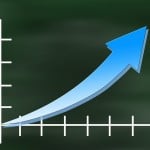 • Optimism about business conditions rose strongly (+53%), at the fastest pace since the start of the survey in November 1998. 56% of firms said they were more optimistic than three months ago and only 3% said they were less optimistic

• 58% of firms said business volumes were up compared with three months ago and 17% said they were down, resulting in a rounded balance of +42%. More robust growth in business volumes is expected next quarter (+55%)

• With 47% saying numbers employed were up on three months ago and 12% saying they were down, employment grew at a solid pace (a rounded balance of +34%) with a similar expansion expected in the coming quarter (+36%)

• There is an increasing focus on IT expenditure, with a balance of +24% planning to boost investment over the next year and 57% citing increasing efficiency/speed/to exploit new technology as a reason to authorise capital expenditure, comfortably above the long run average (42%). Replacing existing capital is also major driver of investment plans (69%).

• Total costs per person rose at the fastest pace (+42%) for over five years, but average selling prices edged up (+12%) which, combined with strong volumes growth, helped lift profitability (+20%)

• Headcount expanded at a solid pace (a rounded balance of +23%, resulting from 30% of firms saying numbers employed were up compared with three months ago, and 8% saying they were down). A further increase is expected next quarter (+28%)

• Expenditure on training/retraining rose at its fastest rate (+23%) since February 2006 (+26%). The availability of professional staff as a factor likely to limit business expansion has become an increasingly prominent concern over the past year (cited by 33% of respondents in this survey)

• Expanding capacity is cited as an increasingly important reason motivating capital expenditure authorisations in the coming 12 months, its highest since August 2012 (both 44%).

Michael Gove given the job of transforming Britain’s prisons

How to Increase Sales This Holiday Season