Organic produce is no more nutritious than non organic food

But there was one distinct advantaged for the consumer of the organic food and that was the reduced intake of pesticide residue and antibiotic resistant bacteria.

Researchers from Stanford University and Veterans Affairs Palo Alto Health Care led by Dr Crystal Smith-Spangler, reviewed evidence from 200 studies and found that both organic and non-organic (conventional) food contained the same levels of nutrients and vitamins apart from a slightly higher level of phosphorous in the organic produce.

The review covered fruits, vegetables, milk, meat, poultry eggs and grains looking at the health of the people that ate them or the nutrient and contaminant levels in the food.

Where antibiotic resistant bacteria were concerned, organic pork and chicken were 33% less likely to carry them than conventionally reared meat.

So when deciding on whether to buy organic or not remember that this latest study puts the only real differences between conventional and organic as not how good they may be for you but how bad. This might come as a surprise to many after all the years of the organic push.

Many people may now be questioning the up to 50% added cost there is for some organic produce if the health benefits are nowhere near as pronounced as thought. 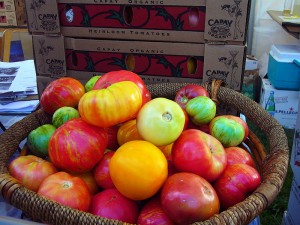