With £12bn worth of cuts to be announced, the Chancellor may wish to borrow some good will from England Women’s football team in his announcement and he is 10/1 to say ‘Lionesses’ and 20/1 to say ‘Women’s World Cup’.

Following his controversial appearance on the Sunday Politics programme where he signalled his intention to force the BBC to curb its online news output, Osborne is also 6/1 to say ‘BBC’ and ‘imperial’ in the same sentence.

Osborne may wish to lend support to the Conservatives preferred Labour leadership candidate, Jeremy Corbyn, and Betway are 5/1 that he’ll be mentioned by name.

“George Osborne will be relishing his first budget speech free of the shackles placed on him by his former coalition partners. However, he now has to make good on election promises.

“Osborne is a canny political operator and he will be very aware of the feel good factor surrounding the Lionesses’ performance at the World Cup. Whether they get a mention from the despatch box, however, remains to be seen.” 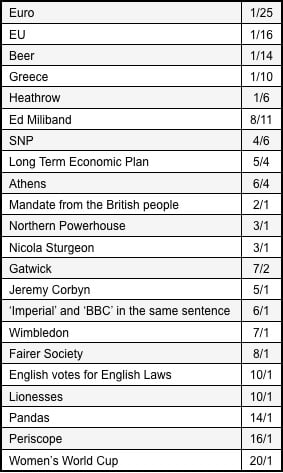