George Osborne is to announce more than 250,000 free nursery or childcare places in the coming budget. This initially sounds wonderful, so why the cynicism?

The truth is that politically correct government regulation of nurseries is what forced childcare prices to the moon. Red tape, high taxes and the removal of family tax credits did more to take away the family's ability to look after their children than this scheme will ever provide.

These plans will cost at least £650m, giving back less than £40 per year for each of the UK's 17million families and only 40% of families will get any benefit, though I very much doubt that figure will be achieved without more money being found elsewhere. This is partly because this injection of cash will be inflationary. Child care providers will raise their prices as a result of this cash injection, ensuring that the money will not stretch so far. Government will also have to borrow money to pay for this because they are broke, meaning that we will probably end up paying more in taxes than the benefits proposed, further eroding the finances of most families.

The great irony is that this "giveaway" is a tiny fraction of the cash taken from families when family tax credits were scrapped.

The drive to get mothers back into work shows complete lack of understanding of the real problems in our economy and society. Our primary employment issues are for graduates and the currently employed. Tax and spend will not help that situation because it will only divert money from the real economy, causing the loss of yet more jobs, but somehow Osborne believes that the economy will grow only if yet more mothers are forced into the workforce.

The policy of taxing families and using that money to get mothers into the workforce ignores that many stay at home Moms carry out significant activities within the household, the economic value of which can only be properly assessed by the family unit itself. For example, a woman can carry out DIY, home making and cooking that could never be afforded if she was forced by tax and spend to work for the minimum wage, yet government will state that this is a net benefit to the family. Families, allowed to retain more of their money, would be better off being left to carry out their own cost benefit analysis.

Of course, government does not and will not value stay at home Moms, or indeed Pops, because they carry out tasks which cannot be taxed. Families must understand that government is motivated by economic forces which do not necessarily square with the needs of families. This trend was exemplified by the Communist Manifesto which calls for the abolition of the family unit for its conflict with State objectives. That extreme example should be a constant reminder of the correlation between big government and destruction of the family unit.

Progressive increases in tax, inflation (https://mises.org/library/what-you-should-know-about-inflation) and regulations have devastated the traditional family unit to the point where a wage is no longer sufficient to sustain a family. As a result birth rates are plummeting with families having an average of 1.84 children. This is well below the replacement rate of 2.1 children. Our population is only growing now as a result of immigration.

"Why was anybody surprised by the crash?" Peter Schiff

This combines with deregulation of the mortgage market to where most parents cannot afford a family home. My parents purchased their first two bedroom house in 1975 for 2.5 times their wage and that generation are only just waking up now to how their children have been ripped off by the banking system. Few understand how that occurred, so are unable to take appropriate action and are vulnerable to being suckered into false political solutions that will further erode their standard of living.

Previously, mortgages were treated as liabilities on the balance sheet because there is always a risk that the mortgagor will default. Banks therefore used to maintain reserves to hedge against that risk and this is why they tended to limit lending to between 2.5 and 3.5 times salaries. This maintained a lid on prices, kept homes affordable for families and moderated the boom and bust cycle.

As a result of de-regulation, banks were allowed to bundle mortgages into derivatives which governments, for the first time, allowed banks to treat as assets. This encouraged lax lending because unlike with liabilities, there is no limit to the quantity of assets a bank can hold on their balance sheet. Mortgages, once treated as assets, could also be used as collateral for further mortgage lending, which could be used as collateral for further mortgage lending, and on and on, forming an unsustainable pyramid selling ponzi-scheme.

If that wasn't bad enough, the previous fire wall between savings and loans banks and investment banks was ended, thus allowing your high street bank to gamble with your cash and mortgages on global markets. That would previously have been considered a breach of contract because consumers place money in deposit accounts for safe keeping, low risk and moderate interest payments.

Banks used much of that money to invest in commodities, forcing up the cost of living, explaining a major part of the inflation [1] we have suffered the past few decades. All of this lending and investment was also at the expense of traditional lending to productive industry and farming, which is one of the reasons why this coincided with the systematic destruction of jobs and production.

The ponzi scheme collapsed in 2008 with the "credit crunch". There should have been a short, but sharper depression and liquidation of debt to re-balance the economy. However, governments everywhere, including our own, further double crossed us by using tax payer money to bail out that fraudulent system allowing the bubble to further expand at the expense of the general public and the productive economy, all of which contribute to eroding the viability of the family unit.

To put the derivatives market into context, it has, since deregulation, expanded to over a $1 quadrillion, which is coming close to $190,000 for every man woman and child on the Planet. This is of course impossible to pay off and propping it up can only result in us collapsing into third world poverty, where all our tax money is diverted from useful projects into towards paying off the national debt.

Iceland took a different route. They audited the debt the IMF claimed was owed by the Icelandic people and discovered that the vast majority was the gambling the debts of private banking institutions, many of which were transnational corporations that contributed little to their national economy if they were not systematically looting it. The people rose up and refused to pay, creating a new Constitution against banker occupation. Austerity, aka debt slavery, was avoided and its economy has returned to a healthy GDP growth [2] of 2.5%.

Meanwhile, here in Britain we are being told that ten years of austerity are required before we return to growth. This is another way of saying that we must suffer higher taxes and reduced standard of living because international bankers cannot be allowed to loose any money. They hold our economy to random, claiming that the economy relies upon their "expertise", with Lloyd Blankfein, CEO of Goldman Sach's claiming that he does God's Work. Meanwhile, Goldman Sach's are using the crisis they were party in creating to gain control of the levers of political power in Europe. 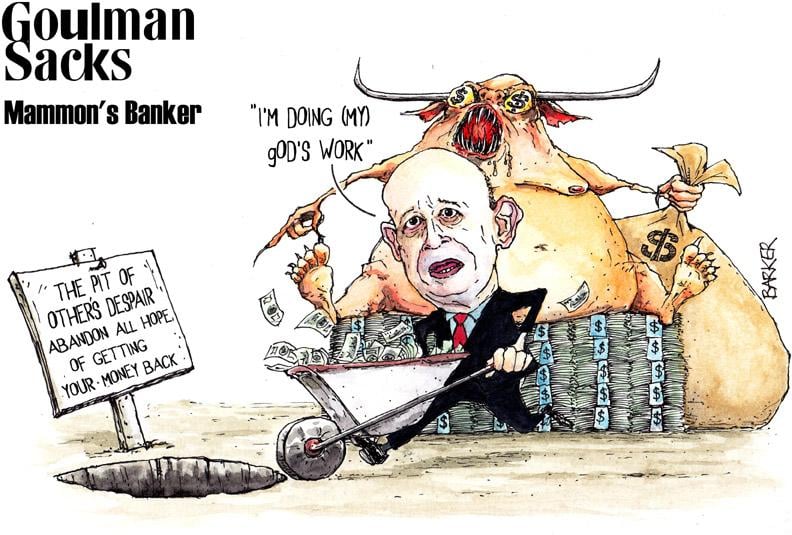 Rather than protect our interests by letting banking institutions fail and returning us our hard earned money, George Osborne wants all mothers, maybe in the future all children? out to work to ensure that we are doing our part to pay off the fraudulent gambling debts of private transnational banking institutions.

To make things worse, we form 4.5% of the International Monetary Fund (IMF) so are committed to paying that percentage of any IMF bailout. We will therefore continue to pay hundreds of billions to help Eurozone countries pay off gambling debts they signed their people up to that they cannot afford to pay. The United States, being a major part of the IMF continues to rip off its people, handing money hand over fist to international bankers via the bailed out countries in overt contradiction to their Bill of Rights and Constitution. Of course, withdrawal from the IMF and repatriation of our money would do wonders for the finances of British families, but that solution is off the table when globalists like Osborne remain at the helm.

The truth is, that proper banking reform, similar to what occurred in Iceland, could return our economies to growth in a very short time. Increased prosperity would reduce our reliance on government letting them reduce the tax burden, allowing families to re-take control of their own finances. We would re-discover that entrepreneurs, small family businesses and the family unit, not Goldman Sachs, are the backbone of a thriving economy.

It is time that the government stop shovelling chicken feed to the public in the form of hollow gestures such as free child-care, whilst they rip us off royally with the other hand on the behalf of an international banking cartel.

"The Cultural and Spiritual Legacy of Fiat Inflation" – https://mises.org/library/22-nature-state