There is an old saying that ‘an army marches on its stomach’, but that seems to be a Napoleon Bonaparte adage that has completely by-passed the government and the Ministry of Defence.

According to the Express, British soldiers are conducting arduous training on empty stomachs. In fact many would rather be back in a battle zone because the food is better and free.

Major General Patrick Cordingley, who took our forces to victory over Saddam Hussein, is quoted in the Express as saying “This is an extremely serious situation and it must be addressed by the Ministry of Defence as a matter of urgency. Either they should be paid more or their food should be more heavily subsidised.”

But the MOD is blaming the situation on the soldiers saying that they must learn to budget and not blow it all on ‘billionaire’s’ week-ends. The MOD has a ‘hungry soldier’ scheme where they are given food vouchers and have pay stopped until they learn to manage their financial affairs.

Forget about remote drones and the like, at the end of the day to get the job done properly you need boots on the ground. Well trained and well fed boots. Army training is not a walk in the park. It is extremely physically demanding and, as a result, their bodies need about 2,900 calories a day to function properly.

But there are serious concerns that recruits, who are on a wage starting at Â£14,000 per annum rising to Â£17,265 when they have successfully completed their basic Phase 1 training, cannot afford to eat properly. 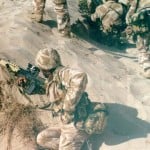 Contrary to popular belief servicemen and women do not get free food. They have to pay not only for their food but also for their accommodation.

And according to the Express report they pay Â£540 a month for this, which is two thirds of their take home pay.

An independent report, submitted to Parliament by the Recruit Trainee Service said that 83% of soldiers said they could afford to eat on the ‘Pay As You Dine’ (PAYD) system, which has been in place since 2006. But that does leave 17% who cannot do so. The PAYD system was brought in to give service people more choice.

However we do it we must ensure our military people and their families are looked after properly. So let’s start by ensuring that they don’t go hungry.