Outlook for Japan as reconstruction starts

One year on from the devastating tsunami in Japan, reconstruction programmes are finally commencing.Â  Feedback from fund managers of AIC Member investment companies suggests there is potential for a much deserved boost to the Japanese economy, particularly given tentative signs of an improving US economy, which should help exports.

Over the last year, the UK Smaller Companies investment company sector has slightly outperformed the wider Japan sector.Â  What is the outlook for Japan?

John MacDougall, Manager, Baillie Gifford Shin Nippon said: “Growth expectations have been pared in the wake of last year’s earthquake and tsunami while the strong yen and state of the global economy has clearly created challenges for exporters.Â  Japanese small caps outperformed their larger peers last year because investors were seemingly more concerned about the impact of a faltering global economy on the larger Japanese exporters than about domestic demand.Â  The tentative signs, that the US economy is recovering and that the Japanese authorities may be adopting a more proactive stance to weakening the currency, are encouraging.Â  In addition, the economy in general should benefit this year as reconstruction programmes finally commence in the areas worst affected by the tsunami.

“Despite the events of 2011, some areas of the Japanese economy experienced very impressive rates of expansion, such as e-commerce, smartphones and energy efficient products.Â  Many of Shin Nippon’s holdings in these dynamic sectors are run by younger, more entrepreneurial managements than average and in our opinion will be able to generate strong earnings growth irrespective of whether the broader economy is expanding.”

Andrew Rose, Manager of Schroder Japan Growth Fund said: “2011 presented Japan with more than its fair share of trauma, particularly the devastating Tohuku earthquake and tsunami in March closely followed by the nuclear disaster. The hit to consumer confidence and supply disruption which affected some industries was a significant negative for the economy. By contrast 2012 should see a bounce back, especially as the recovery from the 2011 shocks has been faster than initially expected.

“The stock market remains attractively valued and a laggard relative to global markets. This makes it well positioned if global economic conditions sustain their early signs of improvement.”

“For the full year we expect revenues to increase 2-3% year on year and recurring profits to decline 9%. Results have so far been poor, especially in the manufacturing and technology sectors with major companies such as Sony and Sharp disappointing the market with weak profit guidance. Although the recent share price performance of mobile and social gaming stocks has been lacklustre, Nintendo’s poor results confirm that people are shifting away from consoles to playing games on tablets and smart phones. The company’s outlook for a loss for the full fiscal year ending March 2012 is the first in at least 30 years.

“2011 marked the first annual trade deficit since 1980, coming in at JPY 2.5 trillion, which is about 0.5% of GDP. Most economists expect the trade balance to remain depressed during the first half of 2012 due to continuing high liquid natural gas prices, a shift to thermal generation, and an upward trend in imports owing to the hollowing out of the manufacturing sector. However, as production normalises, especially in the automobile sector, we believe the trade balance will move back into a surplus in the second half of the year. Industrial production came in stronger than expected, rising 4% month on month. The near-term outlook is also upbeat, with manufacturers’ output projections for January and February rising 2.5% and 1.2%, respectively. Additionally there was a further improvement in the headline manufacturing PMI to 50.7, consistent with the optimistic outlook for a continuation of the recovery in production. Much of the growth is coming from automobilesÂ  post the repair of supply-chain disruptions caused by the floods in Thailand. 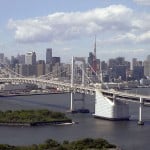 “The Japanese yen remains in a tight trading range versus the US dollar, finishing the month at 76.3. Prime minister Noda’s call for a weaker yen was dealt another blow when the US Federal Reserve added 18 months to its expected period for holding policy rates at near zero, which started in December 2008, until late 2014. The difference in interest rates on five-year notes has since dropped to the lowest level in 20 years.”

Annabel Brodie-Smith, Communications Director, Association of Investment Companies (AIC) said: “The land of the rising sun has experienced more than its share of false dawns.Â  But with manufacturing figures slowly improving, and positives coming through from the US economy, confidence amongst managers seems to be improving.Â  Investors need to do their homework, take a long-term view, and ensure they have a balanced portfolio.Â  It’s also worth remembering that drip feeding your investment on a monthly basis can help smooth out some of the highs and lows in the price of shares.”