With home ownership still the ultimate goal for nine out of 10 Britons in the rental sector, research carried out by flat and house share website SpareRoom.co.uk reveals that, in many parts of the country, people can actually save a 15% property deposit in less than three years by flat sharing instead of renting alone.

Despite the widely-held view that buying a first home is out of reach – tenants renting solo reckon it will take them an average 5.5 years of saving to be in a position to buy, and half say they are unable to save for their long term futures[2] – the findings show that considerable financial savings can be made by renting a room in shared accommodation, rather than renting a whole property.

Making this change to their living arrangements would enable tenants to build up their own 15% deposits by 2016 without the need for the Government’s Help To Buy equity loan scheme[3]. If they do use the Help to Buy scheme to purchase new-build property, renters could save up the required 5% deposit in just 12 months by sharing.

SpareRoom figures suggest many people are already cottoning onto this. New flatsharer numbers have risen by 25% since 2011 and – as more people wake up to the financial benefits of renting by the room – flat sharing numbers are expected to soar throughout 2013.

So, just how much can be saved by flat or house sharing rather than renting alone? Across the UK (excluding London) the average cost to rent a one bedroom flat (including bills) is Â£8,394 per year, while the cost of renting a room with bills included is just Â£4,680. With an annual saving of Â£3,976 – that’s 79% – it would take three years and 10 months to save up a 15% deposit for an average one bed flat costing Â£101,253 if the renter moved into shared accommodation.

In London, the difference in price between renting a one bedroom flat, which costs an average Â£19,140 per year, including bills, and renting a room in a flat or house share at Â£7,914, also including bills, is a staggering Â£11,227. Based on the average price of a one bedroom flat in the capital, which is Â£282,200, it would take a renter just three years and nine months to save up a 15% deposit, if they moved into shared accommodation.

Depending on where you live in the country, flatsharing for just two years could be enough time to save a deposit for a one bedroom flat in the same area. For example, the following table shows some of the UK towns and cities where you can save a 15% deposit in the fastest time: 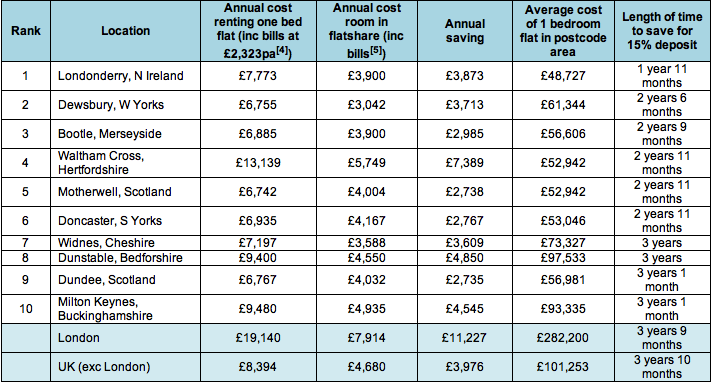 Matt Hutchinson, director of SpareRoom, comments: “Most Brits currently renting have aspirations of home ownership but, because of the high cost of living, coupled with static wages and inflated property prices, they don’t believe it will ever be a reality. Many see themselves renting for the foreseeable future.

“However, what many renters may not realise is that owning that first property doesn’t have to be a distant dream. All it may take is a small adjustment to their living situation in the short term. Some people may not consider sharing as an option beyond their student days or early twenties – even though the quality of shared accommodation is improving fast. But huge savings can made by renting by the room in a flat or houseshare with other young professionals, and our figures suggest growing numbers are cottoning on to this.

“The property and mortgage markets are showing signs that they’re on the road to recovery, which is making aspiring buyers all the more determined to build up their property deposit funds. The fact that it might take less than three years to raise the necessary funds to buy that first property is likely to encourage more people to consider the flatsharing route in the short term. By 2016 they could be saying goodbye to renting forever and opening the front door to their own homes.”