Potential investors should steer clear of a US$90 million initial public offering (IPO) in an Indonesian palm oil company due to the involvement of a former illegal logging kingpin and the potential impact on precious orangutan habitat, the London-based Environmental Investigation Agency (EIA) warned today.

The company, Sawit Sumbermas Sarana (SSMS), currently holds a land bank of 78,000 hectares in the Indonesian province of Central Kalimantan and is seeking investment to expand its palm oil plantation area through an IPO on the Jakarta stock exchange scheduled for today (December 12).

The founder of SSMS is Abdul Rasyid, who currently controls all of the shares in the company through family members. Rasyid has a track record of forest crimes in Central Kalimantan stretching back to the late 1990s; in 2000 he was named by the Indonesian Government as one of the top 18 illegal logging bosses in the country.

On a follow-up investigation in early 2000, an EIA staff member and her Indonesian colleague were abducted and assaulted at gunpoint by Tanjung Lingga staff.

“Rasyid has tried to airbrush out his past as a major illegal logging boss and is now seeking respectability to expand his palm oil business. He made his first fortune through massive timber theft and is seeking to grow his wealth through further destruction of Central Kalimantan’s dwindling forests.” 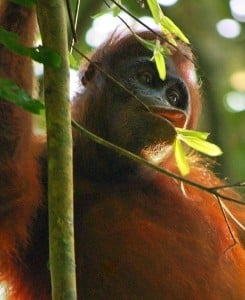 In addition to Rasyid’s murky past, an independent evaluation of SSMS’s prospectus reveals illegal clearance of forest areas and direct threats to orangutan habitat posed by planned expansion of the firm’s oil palm plantations.

The study, carried out by Profundo, found that between 2003-12 SSMS cleared 10,784 hectares of forest for plantations despite not having central government permission for most of the clearance, in direct contravention of the 1999 Forestry Act. Also, 44 per cent of the company’s land bank overlaps high conversation value forest which is potential orangutan habitat; two-thirds of this forest had already been cleared by 2012.

Further expansion of SSMS is threatened by recent commitments made by two of its main buyers to avoid crude palm oil derived from conversion of high conservation value forests.

“Given Rasyid’s past activities and the current threat posed by SSMS to vital orangutan habitat, when it comes to the imminent IPO it is clear case of ‘investor beware’.”