One the eve of the EU elections, 120 campaign groups from across Europe have rejected the trade negotiations between the EU and the US as a threat to democracy, and have called on negotiators to radically rewrite the proposed agreement.

The Transatlantic Trade and Investment Partnership (TTIP) is set to affect food safety, digital rights, social and labour standards and environmental protection. The campaign groups believe the deal is being negotiated in the interests of big corporations, at the expense of citizens and the environment.

In a statement released today, the groups have demanded that the proposed 'investor state dispute settlement', which would allow foreign corporations to sue member state governments and the EU, is dropped from the agreement. They also want negotiators to abandon proposals for a 'regulatory cooperation council', which would give companies and unelected officials power to determine regulation. They claim the deal as it stands would slash social, environmental and labour standards, and have criticised the negotiations as lacking in transparency and democratic process.

The statement has been signed by environmental groups, social movements, consumer rights groups and trade unions, including the World Development Movement, War on Want and the Stop TTIP UK campaign.

The deal is being negotiated between the European Commission, acting on behalf of member states, and the US government. A fifth round of negotiations on the deal began on Monday in Arlington, USA, and is due to conclude this Friday, 23 May. 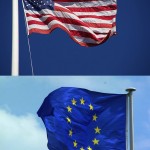 "The deal attacks democracy, public services and the laws that protect citizens in the UK and the rest of the EU. It is also being seen as a blueprint for trade deals worldwide, so it will further undermine the ability of developing countries to stand up to big corporations. There is nothing progressive in the deal, and it should be ditched."

"If this trade agreement is allowed to go through, it will be the biggest transfer of power to capital that we have seen in a generation. That is why we are seeing a surge in popular resistance to TTIP from across Europe and the USA alike, as people learn what it will mean for their futures. All those hoping to be elected to the European Parliament this Thursday should take note."

"This 'trade' deal is not about trade but about giving transnational corporations rights. We will lose our health and safety standards, in food and chemicals for instance, as regulations are driven down to suit these corporations. In fact this process is the basis of the deal. This is not what people here want."

Money for nothing, but it can be for free