If you've been told that your child is too young to get their eyes tested, or they have to be able to read to have an eye test – then you have been misinformed. What's more, according to the Association of British Dispensing Opticians (ABDO), many parents in the UK admitted they are unaware that their child's eyes need to be tested at an early age. (See infographic below.)

One in eight parents wrongly believe children only need to get their eyes tested if their parents wear glasses, and 85% admit to not knowing much about children's eye care. The study of 2,000 UK parents with children under the age of 12 has shone a light on the lack of focus parents put on their children's eyesight. 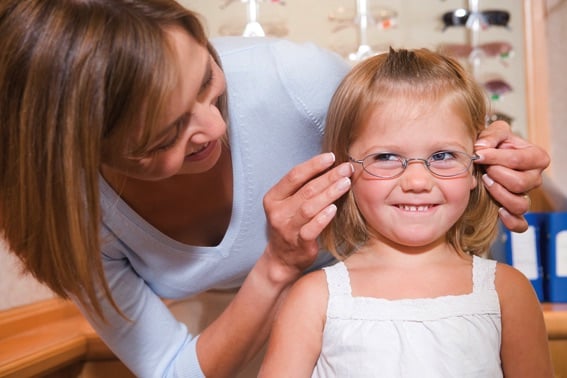 "It's never too soon to get your child's eyes tested. Children can have an eye test before they learn to read, and the sooner some eye problems are picked up, the easier it is to treat them."

Children's eyes should be tested when they are a toddler, as early detection of some conditions can be treated more effectively, and potentially rectified. It is also recommended that children have their eyes tested at least every two years, or even every six months dependent on their needs – yet almost 6 in 10 parents remain unaware of this. A further third strongly believe that a first eye test is only due when children start school; this can be too late!

The potential effects that come from undiscovered eye conditions, such as lazy eye, squint and colour-blindness, can cause repercussions in many areas of a child's life. Spectacles have the potential to straighten a squint – which a massive 72% of parents were unaware of.

ABDO, which represents over 5,700 qualified dispensing opticians in the UK, are making parents aware that children don't need to be able to read to have an eye test. The Association is stressing the importance of getting children's eyes tested by a registered practitioner from an early age. Children under sixteen, as well as those aged between 16 and 18 in full time education, get the cost of their eye test covered by the NHS and a voucher towards the cost of a pair of spectacles.