The Paris police are out in force today checking that only cars and motorbikes with odd numbered number plates are entering the French capital. Tomorrow it will be the turn of those with even numbered number plates to be given access to the roads of Paris. The reason? Because the air pollution levels in Paris exceeded safe levels for five days in a row due to the recent weather conditions.

There are exceptions to the ban, those with three or more passengers or those using hybrid or electric vehicles.

“The French are right to get tough on air pollution – it’s time we did the same in this country too.

“Tens of thousands of people die prematurely in Britain every year because of poor air quality, and the EU has now launched legal proceedings over our failure to tackle it.

“The situation is particularly bad in London, where Boris Johnson and the UK Government have done far too little.

“Strong and urgent measures are needed, including reducing London traffic levels, if we are to end this national scandal, and make it a capital city to be proud of.” 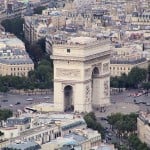 Traffic is the primary cause of London air pollution. Friends of the Earth says a number of measures should be considered to tackle it, including:

• The provisions of better and more affordable public transport;

• Making it safer and easier for people to cycle in the capital;

• An end to new road-building plans in London, including more river-crossings;

• The introduction of emergency measures, such as those in Paris, when air pollution levels become dangerously high.

Michael Sheen to David Cameron: it's time to ban wild animals in circuses