Amidst all the panic and uncertainty, Pastor Conlon and a few other key members of Â Times Square Church braved the oncoming hurricane Sandy to send a message of hope to his congregation and America at large via a live emergency broadcastÂ reading aptly from the Gospel of Mark chapter 6 verse 45.

As the floods rose around them filling the subway stations, Conlon and the 19 others chose to stay including another pastor, church elders, support staff and other people who felt the need to rideÂ theÂ storm and assist in the broadcast sent from the radio room behind the church'sÂ sanctuaryÂ in Manhattan's Broadway TheaterÂ district.

Times Square Church gained fame for the works of it's late founder, Pastor David Wilkerson who penned books such as the highlyÂ successful 'The Cross and the Switchblade' which was later turned into a film.

Wilkerson also set up Â the Teen Challenge addiction program helping peopleÂ acrossÂ the world deal with their alcohol and drug problems and after his death in April 2011 many worried if anyone could continue to inspire and reach out to so many.

But waiting in the wings was David Wilkerson's good friend and successor, Pastor CarterÂ Conlon who has captivated a global audience with his humble servant heart, integrity andÂ willingness to continue Wilkerson's work of having a church that is active in the community trying to help the needy and it is for this very reason that Times Square Church has gained such respect in New York and internationally.

Carter Conlon and the 19 others from his church were not the only onesÂ ridingÂ the storm last night in New York and across the eastern seaboard of the United States but they are a noble example of the selfless courage displayed by the people of New York exemplified by the actions of the emergency services the last time disaster struck that city over 11 years ago.

Whatever your faith or belief system may be, one cannot help but feel admiration for persons such as Pastor Conlon and the other's who felt duty bound to man the decks even in the face of adversity in order to give American's the one thing that politicians have conclusively failed to deliver. 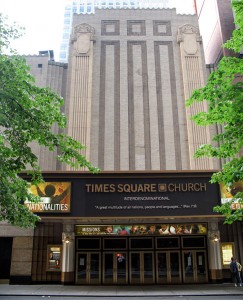 The burden of proof

House prices have risen so where are the lenders?