Cruelty an Inevitable Part of Wool Production, Not So Vegan Varieties, PETA Cautions

California-based clothing company Patagonia has announced that it has stopped buying wool, following PETA’s release of highly disturbing video evidence of violent cruelty on farms that are part of the Ovis 21 network in Argentina—supplier to the clothing company.

In a statement, Patagonia CEO Rose Marcario called PETA’s exposé, which showed workers kneel on conscious lambs and saw through the animals' necks with their knives, causing them to bleed and vomit as they struggle, their legs kicking and tails flailing, “shocking” and announced the company had stopped buying wool from Ovis 21, and would not buy wool again until the company  could be assured of “the humane treatment of animals.” While Marcario notes that that some of the sheep were killed for human consumption, PETA points out that all sheep used for their wool are eventually slaughtered when their usefulness wears out—including those who are punched, thrown, and cut up during shearing for their wool. 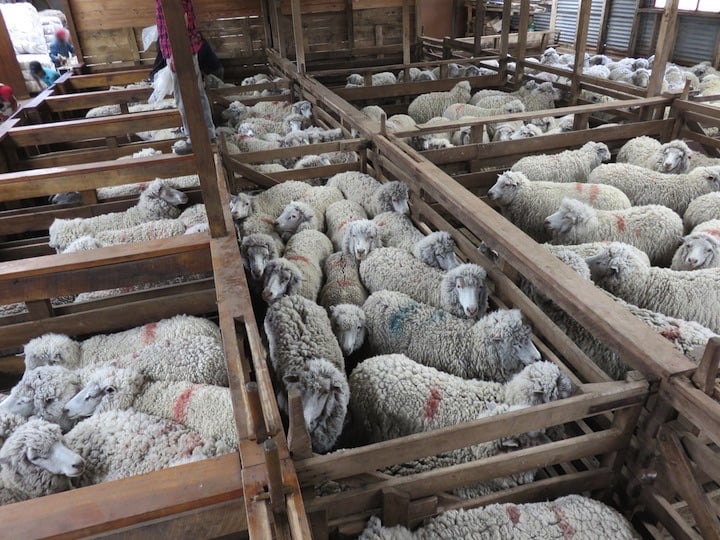 Sheep were kept in severely crowded pens before shearing

“Under pressure from consumers who have pledged to bury, burn, return and give away anything they have with the Patagonia brand, and never buy again, Patagonia has gone beyond apologizing, and now says it will not buy more wool until it can extract certain assurances from its supplier,” says PETA President Ingrid Newkirk. “PETA praises the new move, as ‘all steps are good steps,’ but cautions that as Patagonia delves deeper into the wool supply chain, it will find that cruelty will always be a part of wool production as we have found in Australia, the U.S.,  and now Argentina. PETA remains hopeful that with the handwriting on the wall about the suffering of animals used for clothing, from crocodiles to rabbits to minks to sheep, that the only one hundred percent humane solution is to switch to all-vegan wool.”

PETA filed a complaint with Argentinean authorities, citing Argentina's federal animal-protection law. PETA's exposé shows that lambs cry out, gasp, and kick even after workers sawed open their throats and snapped their heads backwards, while just feet away, other bleating lambs watched.

Shearers also stomped and stood on sheep's legs, and fast, rough shearing left the animals cut and bleeding. The eyewitness never saw the sheep receive veterinary treatment for the wounds, at least one of which was so severe that internal tissue jutted out and the animal reportedly later died. Once no longer wanted, older sheep were lined up and some were tackled and dragged away to be shipped off to slaughter.

3D-TV could damage your health

2013: The current partnership between finance and technology