This autumn Tate Britain will present Paul Nash, the largest exhibition of the artist’s work for a generation

Paul Nash is one of the most distinctive and important British artists of the 20th century. Renowned as a war artist in both the First and Second World Wars, the exhibition will further reveal Nash’s work from his earliest drawings through to his final visionary landscapes. Nash was fascinated with Britain’s ancient past and spent time in southern England exploring the downs and coastal areas. The exhibition will look at how these landscapes influenced his work and provided a stage for his engagements with international modern art movements such as surrealism.

The most evocative landscape painter of his generation, the exhibition will cover all the significant developments of Nash’s career, opening with his early Symbolist watercolours exploring the mystic life-force of trees, and the powerful shattered landscapes of the First World War. Nash became an Official War Artist in 1917, expressing the waste of life through the violation of nature. He created some of the most iconic images of the First World War such as We Are Making a New World 1918.

On his return, Nash’s landscape paintings focused on places of particular significance to him including Dymchurch where a series of works such as The Shore 1923 reflected on his war experience and evoked the bleak beauty of the Kent coast. In the 1930s Nash drew on surrealist ideas to interpret the British landscape in a way that made connections between modernism and tradition. He explored the idea of a life force in inanimate objects from monoliths and trees to stones and bones. These ideas were realised through the juxtaposition of found objects with landscape to create mysterious encounters, in paintings such as Event on the Downs 1934 and Equivalents for the Megaliths 1935. 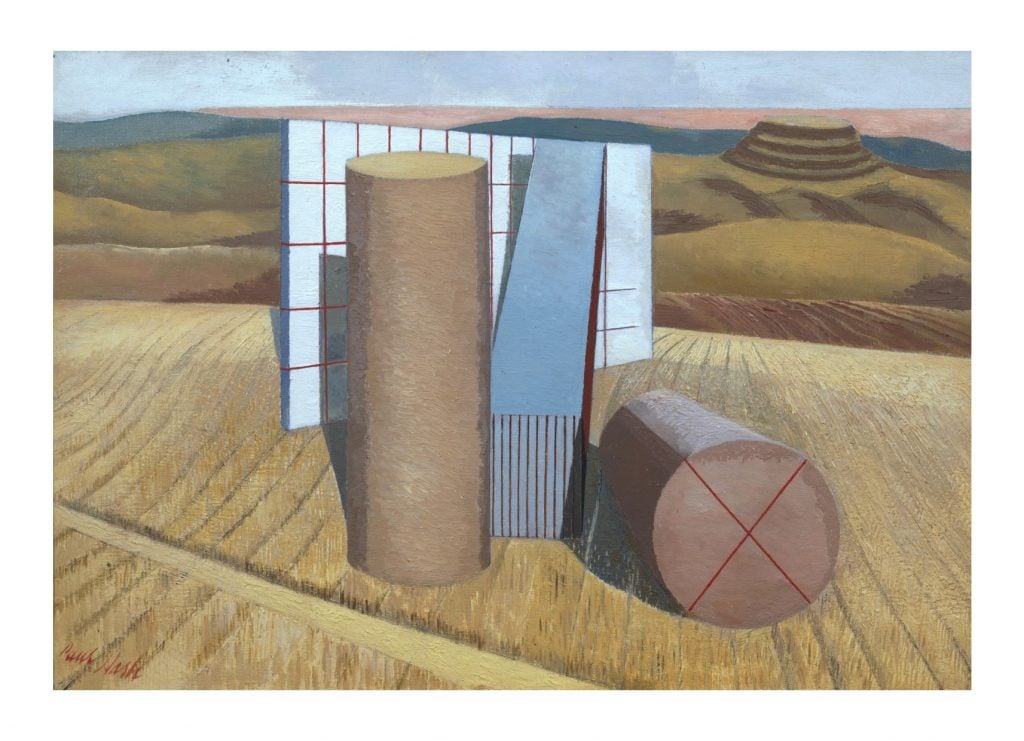 Photography became an important part of Nash’s working practice in the 1930s, combined with natural objects in assemblages such as Only Egg 1936-7. This way of working was similar to that of Eileen Agar with whom Nash worked closely during this period and the two artists’ work will be shown together in the exhibition. In the late 1930s Nash’s landscape paintings increasingly explored the boundary between dream and reality such as Landscape from a Dream 1936-8. At the end of his life the Wittenham Clumps in Oxfordshire stimulated a series of visionary landscapes inspired by the seasonal cycles of the equinox and the phases of the moon including Landscape of the Vernal Equinox 1943.

The exhibition will be the first to examine Nash’s position at the centre of developments in British modernism and his dialogues with international artists as one of the leading figures in British surrealism. It will show his contributions to major exhibitions of the 1930s, such as the International Surrealist Exhibition of 1936 and the Unit One exhibition which toured across the UK in 1934-5. Nash was a founder member of this British modernist group of painters, sculptors and architects which included John Armstrong, Barbara Hepworth, Tristram Hillier, Ben Nicholson, Henry Moore and Edward Wadsworth. The exhibition will show works by Nash alongside those of fellow Unit One members, exploring the debates about abstraction and surrealism in which Nash participated during this period. The exhibition will examine how Nash’s work was both an imaginative response to the natural world and at the centre of developments in modern art in Britain.