Basic Instinct director Paul Verhoeven will direct a controversial film which portrays Jesus as the by-product of Mary and a Roman soldier.

In the film, based on Verhoeven's book 'Jesus of Nazareth', we will see history rewritten in the latest cheap shot by yet another artist who thinks that insulting the Christian faith is fair game because we live in the 21st century where such artistic expressions are beyond moral reproach.

At this stage there is said to be no script for the film, however the main theme of the film is this, Jesus was not the son of God and in a world that isÂ revellingÂ in acts of Blasphemous Modern one must ask if such a film would be considered if it concerned the central prophet in the Muslim faith seeing as such aÂ blatantÂ act of blasphemy would almost certainly lead to a violent backlash.

Instead of being the son of God andÂ redeemerÂ of all sin Jesus will, thanks to Verhoeven, find his on screen status slightly adjusted to that ofÂ illegitimate son of a Roman soldier and that Christ wasÂ conceivedÂ through forced sexual entry upon the virgin Mary by saidÂ RomanÂ soldier and through adversity Jesus turned into an alright chap who had a few good ideas about how we treatÂ one another.

Would the director be offended at a film which speculated upon his paternal origins with the justification of calling it art?

We live in a world where drawing a moustache and a swastika on a picture of the Queen can cause the police to intervene and the offending image to be confiscated. Yet a film which causes great offence to Christians world wide will, I am sure, be allowed to be played in cinemas across the planet under the protection of freedom of speech cheered on by secularists who love a good old bit of Jesus hating.

I am sure that there will beÂ demonstrationsÂ outside cinemas which show this film, but all that does is draw further attention to the film and is far better publicity than a thousand YouTube trailers.

Verhoeven does not have to justify the artistic merit of this film to Christians but one day he will have to justify it to some higher authority – and I don't mean those whoÂ classifyÂ film ratings. 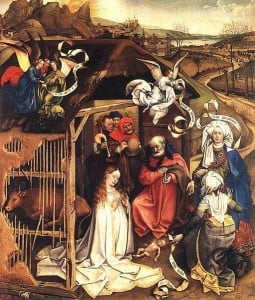 The Nativity (by Robert Campin)

Why are there over 18,000 unfilled clerical and administrative jobs in the NHS?