Pavilion Books' A Night in the Cells: Publishing world unites for campaign fundraiser

Leading independent publisher Pavilion Books has announced a unique fundraiser for charities The Book Trade Charity (BTBS) and the Howard League for Penal Reform, to support their work and highlight the Howard League's Books for Prisoners campaign.

A Night in the Cells [1] (#CellNight) sees a range of high-profile figures from the literary and arts world, including publishers and literary agents, competing in a charity auction to be one of six people locked up in cells in the Pavilion Books offices on the night of Thursday 19 June.

Pavilion's offices are situated in the Old West London Magistrates Court, within which are six Grade II listed holding cells, last used in the 1990s.  One famous occupant of the cells was former Rolling Stone Brian Jones, after being charged with drugs offences in 1967.

At 8.30am the following morning, there will be a press breakfast for those locked up to describe their experiences and why they support the Books for Prisoners campaign.

"A book can be a real lifesaver if you are locked in a prison cell for weeks, months or years.  Reading books also go hand in hand with education, with rehabilitation, with humanity.  If we want to encourage prisoners to read then allowing loved ones to send in books and other essentials to prisoners is surely to be welcomed.

"The Howard League is therefore delighted that Pavilion Books has organised this fundraiser and we hope the government will take note that the publishing world is not impressed with its spurious arguments and obstructive attitude to our campaign."

"All involved in The Book Trade Charity (BTBS) are excited to be involved in this unique and imaginative event.  Funds raised will help us to continue to support those in need in the book trade; people who have spent their lives promoting and encouraging reading.  That we can also highlight the iniquitous issue of banning the sending of books into prison is a special bonus." 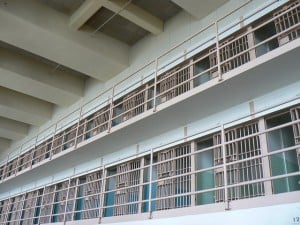 "Pavilion Books is delighted to host this event and to use our strange and powerfully atmospheric cells to support two great charities and such a good cause."

The Books for Prisoners campaign is calling on the government to end restrictions which prevent families and friends sending books, underwear and other essentials to prisoners.  A host of leading writers, including Alan Bennett, Salman Rushdie and Ian McEwan, have called on the Ministry of Justice to review the policy which has been in place since November.

Tens of thousands of people have shown their support for the campaign by signing a petition and sending photographs of bookshelves to the Ministry of Justice's Twitter account using the hashtags "#shelfie" and "#booksforprisoners".  Support from English PEN has seen the UK government's stance condemned by international writers and former prisoners of conscience across the world.