Pawnbrokers as well as friends and family are easing financial pressures as the first port of call according to new research from The Money Shop.

The study highlights that over half (51 per cent) of customers who took part in the survey seeking additional finance to tide them over are turning to family and friends in the first instance or pawning valuable items before seeking more conventional sources of funds such as an authorised overdraftÂ  or bank loan.

The Money Shop research reveals that other methods of raisingÂ  money to getÂ  through the monthÂ  include using a jewellery buying service (21 per cent) or via a Credit Union (18 per cent).

A significant number of consumers are embracing pawnbroking, which has grown by 14% from 2011 to 2012 to Â£851m and has more than trebled in market size since 2006 (Â£248m), as a viable source of finance, with more than a quarter of those questioned (27 per cent) using their valued items to secure lending several times over two years.

71% of customers are loyal to one pawnbroker, more than 80% of borrower’s value factors such as keeping items safe and secure, borrowing from a trustworthy brand and treating customers fairly and honestly when using pawnbroking with gold rings the most popular pawned item.

Before contemplating borrowing from friends or family or pawning items, respondents also stated they would consider getting extra workÂ  or selling items on Ebay.

Andrew Bryan of The Money Shop said: ” our research demonstrates the range of alternative sources of cash individuals are utilising to tide them over. Many highlighted the strained relationship with their bank meaning they had switched to borrowing money from alternative sources. 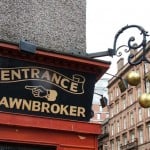 “It would appear consumers are adjusting their perceptions, becoming more open to alternative ways to boost their finances. Whilst our survey also shows that many people were initially unsure about pawnbroking, any misconceptions were dismissed once they had used the service.

“Whilst our survey shows that those fortunate enough to call on friends and family and sometimes have that as an option, pawnbroking is growing in popularity as a quick and easy way to secure vital funds without getting into financial difficulty.”

Figure from the National Pawnbrokers Association.

UK equity markets are looking through electoral uncertainty, but for how long?