"Pay to praise EU" Lords should not be debating UK sovereignty

UKIP Leader Nigel Farage has scoffed at the participation of Lord Mandelson and Lord Kinnock in the House of Lords debate over the EU referendum bill, saying that 'pay to praise EU' Lords should not be participating in a debate on the right to national democracy.

Both Neil Kinnock, who receives an £83,000 per year EU pension, and Peter Mandelson, pocketing £31,000 a year from Brussels, are subject to a clause that does not permit them to criticise the European Union says UKIP. Yet the two Lords were prominent figures both in the second chamber and across UK media arguing against the EU Referendum Bill, which if passed, proposes a referendum on UK membership in 2017.

"Whether this Bill or David Cameron's stance on the issue has any credibility is one thing," points out Farage. "But then there's the fact that a distinct group of Lords in the second chamber will try to quash it anyway by throwing spurious amendments at it to make it run out of Parliamentary time. What I find the most galling is to see these 'pay-to-praise-EU' Lords trying to dominate the argument when they are essentially earning tens of thousands of pounds a year to big up Brussels. 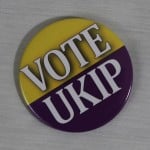 "How can we, in a democratic society, allow this sort of thing to take place inside our National Parliament? What justification is there in giving those in receipt of conditional EU pensions any credence at all on the subject? They should both declare the conflict of interest and step far away from the debate if they want the general public to have any faith at all in UK politics. This is a debate of such national importance, attracting so much public attention, on a subject that could fundamentally change the way we are governed and yet it is being tarnished by self-serving and arrogant washed up politicians."