David Koepp is a name that might not instantly spring to mind to the average cinema goer, but the talented and highly prolific writer and occasional director has ensured the transition from concept to finished screenplay of some of the biggest hits of the last twenty years.

If you want a stylishly slick and no-nonsence screenplay that will appeal to the mainstream then Koepp is your man with the writer lending his skills to big time directors such as Sam Raimi, David Fincher, Brian De Palma and a certain Steven Spielberg.

Koepp has turned director again to adapt a story conceived with fellow writer John Kamps that revolves around that inner city and modern day phenomenon, the bicycle courier. Everyman and go-between Joseph Gordon-Levitt is the rider on two wheels about to discover that his innocent cargo has attracted the attraction of dirty cop Michael Shannon with a high octane cat and mouse chase commencing across the streets of Manhattan.

Cinematographer Mitchell Amundsen also lends his skill and Premium Rush has a very slick, sharp and appropriately chaotic trailer with its imagery of traffic jams and slamming car doors not to mention sidelined pedestrians awaiting to be traumatised genuinely capturing the hustle and bustle of the Big Apple.

Interestingly and perhaps cleverly, the teaser gives very little away concerning the motives of Shannon's policeman or the actual contents of the small and mysteriously enveloped cargo.

The everyman caught up in a larger picture and chased by mysterious villains does hark back to classic thrillers such as North by Northwest (1958) and Marathon Man (1976) with perhaps the film's biggest attraction being its two leads.

The ever likeable and constantly in demand Gordon-Levitt has been highly prolific since his turn in Inception (2010) with the actor lending his acting skills to both comedies and thrillers with the upcoming star next to be seen alongside Bruce Willis in the hotly anticipated time travel feature, Looper.

Likewise, emerging heavyweight Shannon is soon to be seen as the nemesis to Henry Cavill's reinvented Superman in what seems destined to be the biggest draw of 2013.

With a slick running time that clocks in at a mere 91 minutes, Premium Rush's high octane thriller mode combined with an inventive premise and two exciting leads should provide some edge of the seat fun and draw in an audience gone cycle mad after the recent Olympic and Tour de France successes.

Premium Rush is released in UK cinemas on 14th September 2012. 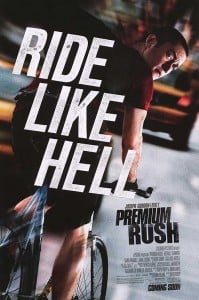 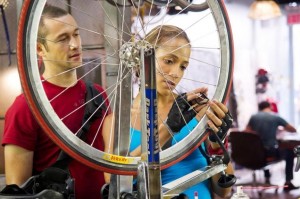