• Deficit as a proportion of profits has risen drastically since 2011, when it was just 25%

• If profits remain stable, it would take just a 0.7% fall in bond yields for the pension deficit to exceed profits by 2019

The aggregate pension deficit of UK plc firms grew by £12bn in 2016 to reach £62bn, which is equivalent to 70% of total pre-tax profits (£88.9bn) for the year. The findings, from the Impact of Pension Schemes on UK Business report from actuarial consultancy Barnett Waddingham, show that the deficit has risen drastically as a proportion of UK plc profits in the last five years, and is now even higher than it was in the immediate aftermath of the financial crisis.

In 2011, the pension deficit was £54.5bn – just 25% of the £214bn pre-tax profits of the top 350 firms that year. In 2009, in the aftershock of the financial crisis, the deficit as a proportion of profits was still considerably lower than it is now, at 60%. Even in years when the pension deficit has decreased, it has still risen as a proportion of profits, and the trend – illustrated in the graph below – demonstrates the challenge facing UK companies in closing the gap. Furthermore, if profits were to remain steady for the next three years, it would only take a 0.7% fall in bond yields for the deficit to actually exceed annual UK plc profits by 2019. 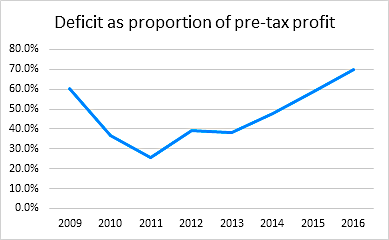 The pension deficit is defined by calculating the difference between the combined assets and the combined liabilities of the UK's top 350 firms (excluding those with a pension scheme surplus). The figure this produces is essentially the gap between the funds that firms hold to meet these commitments and the funds they are expected to need to pay their pension commitments. The deficit has come under increasing pressure in recent years, with rising life expectancy and lower expectations for future investment returns putting more pressure on pension schemes and pushing the deficit upwards.

The Barnett Waddingham report also found that the deficit for the UK's top 350 companies increased as a proportion of market capitalisation in 2016, despite strong performance from the equity market. This trend may be particularly alarming for the 21 firms whose deficit now exceeds 10% of their market value.

One factor that could reduce the deficit in the coming years is mortality, with recent data suggesting that, across the UK population as a whole, longevity has not improved over the past five years. From a DB pension scheme funding perspective this trend could provide welcome respite for companies from the huge improvements in mortality seen over recent decades. If this had been recognised in the financial statements of the FTSE350 companies last year, it would have reduced the aggregate deficit by around £10bn.

"That said, it is also worth bearing in mind that if equity returns continue at the levels seen in the last few years, long-term interest rates rise more than expected and longevity increases do not provide any nasty surprises, the pension deficit problem could solve itself. We must remember that the deficit is essentially the difference between two much bigger numbers and a few gentle economic triggers could completely change the picture. This is why many companies are not rushing to clear deficits quickly with additional cash contributions."

Big Banks Only Good for Dividends?

How Old Economy Stocks Like These Can Make Investing Easier