Markets have been treading water against an ever-challenging political backdrop this month.

As a result, IAS19 pension deficits, the deficit that is recorded in a company's accounts, have drifted higher but these are still below levels seen last year.

However, these figures do hide some pretty major problems. With (RPI) inflation numbers also rising, the real liabilities which pension schemes face look ever more challenging for some.

This month has seen the massive British Steel Pension Scheme reach a long-anticipated agreement on its future. Tata Steel signed a Regulated Apportionment Arrangement with the trustees. This requires the company to pay an additional £550 million into the pension scheme, whilst the members have been asked to accept lower future pension increases. This is a stark reminder that real pension liabilities may be higher than are showing in some companies' accounts. Those firms with pension schemes that are large relative to the size of the company  may be carrying pension risks they cannot afford. 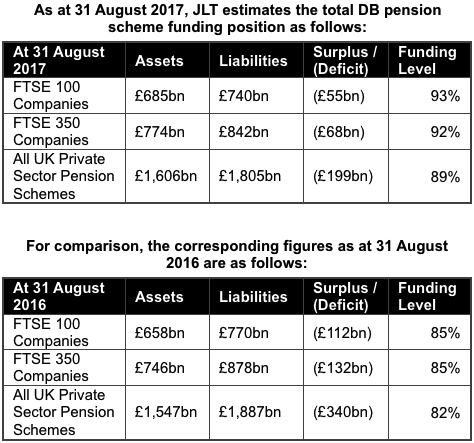 Indeed, those companies and pension schemes currently carrying out their 3-yearly actuarial valuation are likely to see significant increases in funding deficits and hence considerable demands for cash contributions.

This possibility that the IAS19 position may understate the real pension liabilities could be exacerbated by new accounting changes which are currently being considered by the International Accounting Standards Board (IASB). This may appear a minor technical amendment to a part of the IAS19 standard (known as IFRIC 14) but it could result in tens of billions of pounds of additional liabilities being added to the balance sheets of UK companies.