Model and singer Jane Birkin, the inspiration behind Hermès' Birkin bag, has just publicly asked that the luxury bag be renamed after receiving PETA US' investigative report into the farming and slaughter of crocodiles and alligators for the company.

In a statement released to AFP, Birkin says, "Having been alerted to the cruel practices endured by crocodiles during their slaughter for the production of Hermès bags carrying my name …, I have asked Hermès Group to rename the Birkin until better practices responding to international norms can be implemented for the production of this bag".

The news follows a PETA US investigation which uncovered how live reptiles are sawn open on farms that supply the luxury retailer Hermès. 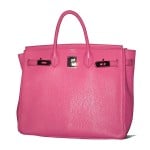 "PETA, on behalf of all kind souls in the world, thanks Ms Birkin for ending her association with Hermès, which makes grotesque handbags that were revealed in a PETA exposé to be constructed from the skins of factory-farmed and cruelly slaughtered crocodiles. We call on Hermès to stop plundering wildlife, factory-farming crocodiles and alligators and slaughtering them for their skins. Once, Birkin bags marked people as celebrities or at least members of the super-rich, but soon, no one will want to be caught dead carrying one, and animal advocates will then breathe a sigh of relief".