An unhealthy lifestyle is associated with a greater likelihood of developing disability over the age of 65, with the risk increasing progressively with the number of unhealthy behaviours, suggests a paper published on bmj.com today.

Disability is commonly defined as “difficulty or dependency in carrying out activities essential to independent living”. With the number of disabled people expected to increase in coming years, researchers feel there is a need to define preventive strategies and slow this progression.

Previous research has shown that unhealthy behaviours (such as physical inactivity, poor diet, smoking) have an adverse effect on health. For instance, the risk of obesity, diabetes, cancer, poor cognitive function, stroke, sudden cardiac death and mortality increases with the number of unhealthy behaviours.

Researchers from France and the UK therefore carried out a study to investigate the relationship between unhealthy behaviours and the risk of disability over a 12 year period.

They used data from the Three-City (3C) Dijon cohort study. Between 1999 and 2001, the study included community-dwelling older people (more than 65 years old) from the city of Dijon (France); participants were interviewed at that time about their lifestyle, including information on smoking, diet, physical activity, and alcohol drinking. They were then followed for the incidence of disability over 12 years.

Three levels of disability were assessed: mobility, instrumental activities of daily living (IADL) and basic activities of daily living (ADL). Mobility assessed the ability to do heavy work around the house, walk half a mile, and climb stairs. IADLs included the ability to use a telephone, manage medications and money, use public or private transport, and do shopping, and, additionally for women, to prepare meals and do housework and laundry. ADLs included bathing, dressing, toileting, transferring from bed to chair and eating. Participants were considered disabled if they could not perform at least one activity without any given level of help.

Low or intermediate physical activity, consumption of fruit and vegetables less than once a day, smoking (current or having quit smoking less than 15 years ago), and no (abstention or former) or heavy consumption of alcohol were all considered as unhealthy behaviours. Characteristics were also identified that may influence the relation between unhealthy behaviours and disability such as cardiovascular disease, diabetes, depression, high BMI and cancer.

Participants who developed disability were older, more likely to be women, and less educated than participants without disability, and they had a worse health profile. 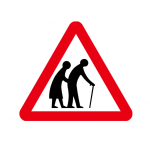 Participants reporting low or intermediate physical activity had a 72% increased risk of disability, independently of the presence of other unhealthy behaviours; similarly, the increased risk was 24% for people who consumed fruits and vegetables less than once a day and 26% for current or short-term ex-smokers. Participants with all three unhealthy behaviours were twice as likely to develop disability. There was no association between alcohol drinking and disability. About 30% of the association between unhealthy behaviours and disability was explained by higher body mass index, lower cognitive function, depressive symptoms, traumatisms, chronic conditions, and cardiovascular disease.

In conclusion, “an unhealthy lifestyle, characterised by physical inactivity, unhealthy diet, and smoking, is associated with a greater hazard of disability” which increased with the number of unhealthy behaviours. Researchers say, however, that these are “potentially modifiable" and that these findings are in favour of "the potential benefit of multibehaviour interventions compared to single-behaviour interventions”.

Cancer rates rise but could be cut with lifestyle changes

The books that made the Kindle great