Is 'Piss Christ' a work of art, a deliberate work of blasphemous modern or one of the most emotive pieces of Christian art ever produced? 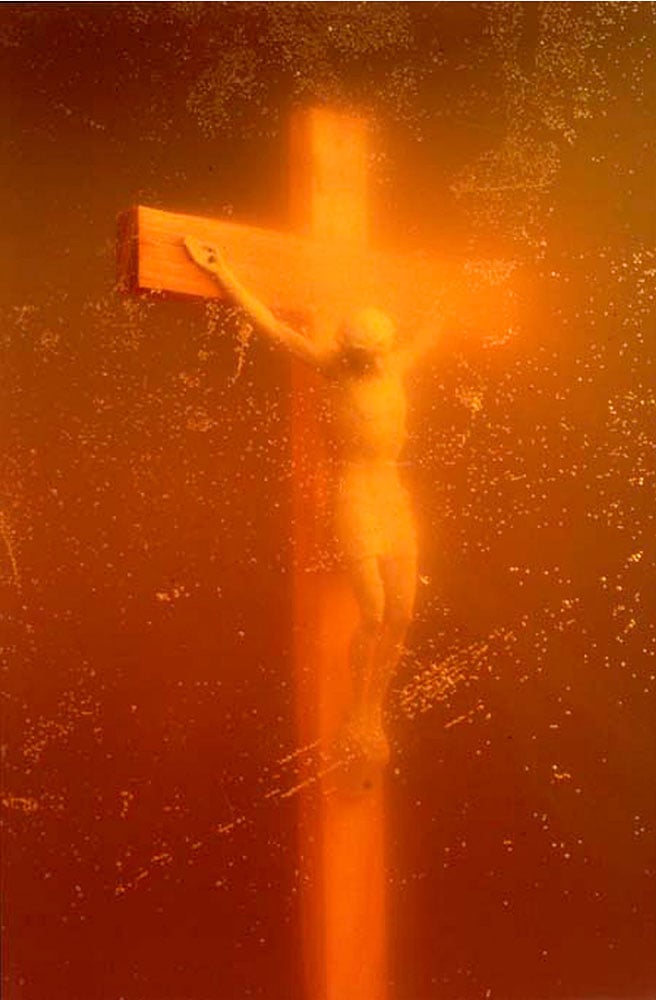 A group of very upsetÂ  Christian protesters have vandalised an exhibit displayed at the Lambert Collection Museum of Contemporary Art, which features a photograph taken by Andres Serrano of Christ submerged in his own urine.

The attack took place not long after more than 800 protesters descended on the exhibition in Avignon temporarily closing the museum which has since reopened with tighter security.

Frederic Mitterand, who is the French culture minister, described the incident as an 'attack on the freedom of creation'.

I wonder what his position would be if there was such an image offered for exhibition with an image of the prophet Prophet Muhammad covered in urine (or General Charles De Gaulle maybe)?

The thinking behind Piss Christ is supposed to be that of a statement regarding the misuse of religion, which wilfully uses Christ's crucifixion as the vehicle to present this statement.

This definitely polarises the intent of the artist towards a blasphemous modern position in the intention behind the work of art.

The work's title 'Piss Christ' also suggests intentional disregard towards the sensitive nature of the subject matter central to the work of art (which it is, even if it is repulsive to the observer).

The influential piece of work, which was made in 1987 and first exhibited in 1989, does have some merit though and I say that as a Christian.

If for a moment as a Christian you disregard the blasphemous modern position of the piece there is actually something quite 'Christian' about the it.

Upon coming across Piss Christ for the first time my initial preconceptions were that of revulsion, however they have changed when placed in the context of the usage of bodily fluids which have been missing from nearly all depictions of Christ on the crucifix.

What Christ endured on the cross was not a sanitised affair.

It was far worse than you can imagine and bodily fluids would have been abundant from faeces, urine, tears, sweat and blood. An altogether horrific image which has never been captured and maybe never should be because the focus for Christians is on the victory in Christ's resurrection and not to dwell on the death.

However the magnitude of Christ's sacrifice has been played down and sanitised in the art world and Christian worship due to the extreme nature of the scourging and crucifixion process.

But maybe this moment of sacrifice needs to be observed for a moment at least in order to take stock of the magnitude of Christ's bodily death before resurrection.

There is a mournful and serene beauty to be observed in Piss Christ and if sweat, tears, faeces and blood were added into the piece it would have possibly added gravitas to it.

But from what I can gather, the intention behind the piece was not one of paying homage to the reality of Christ's gift to mankind, but to degrade it by using it as a medium to express an opinion on religion.

So to summarise Piss Christ I would say it is a great work of art but denigrates the crucifixion and is a possible precursor to blasphemous modern, however as a Christian it made me pause for thought on Christ's bodily death and for that and that alone I am glad to have come across this piece.

I hate to say it but this piece of work has indirectly has a profound impact on the way I, and I'm sure many other Christians, view the cross and probably for the better.

No Christian is going to say "yes I like the idea of an effigy of my saviour covered in urine" because such a piece of art is abhorrent to them and attempting to justify Piss Christ in its current form is almost impossible for Christians. But there is good to be extrapolated from Piss Christ's creation if we look beyond the blasphemy of the creator of this work.

May the fourth be with you