Leanne Wood is the biggest threat to Labour since Neil Kinnock

Since Labour abandoned its socialist roots there has been a left wing gap in Welsh politics, but new Plaid Cymru leader Leanne Wood is about to change all that.

Leanne's appointment to the position of party leader spells the end of the old guard in Plaid who she beat in the leadership contest seeing off Elin Jones and Lord Elis-Thomas.

Regardless of political persuasion it is hard not to get exited about someone who is prepared to offer a new vision for Wales and with the infective construct of the Welsh Assembly in it's current form the people of Wales have tragically become more concerned over UK national politics and shunned what they perceive as a talking shop sitting in the heart of Cardiff Bay.

Under the leadership of Neil Kinnock, the Labour hierarchy removed itself from it's core socialist support but could always count on votes to keep the Conservatives out.

Many generations will pass until the people of the South Wales Valleys forget the way in which the Thatcher administration purposefully removed the mining and steel industries with total disregard for the communities those industries served.

It was only a matter of time until a new socialist vision was presented to the Welsh people offering hope of a society where policies are derived from the needs of the people and communities and not dictated by the interests of a political class corrupted by greed.

The global economy is paying the price of globalism and if the politicians in Westminster are not prepared to tackle the endemic corruption at the heart of our financial services then there is an opportunity for Wales to take advantage and stake a claim for independence and pick up on the Zeitgeist of the nation in rejecting what we are told is a capitalist system (which it is not but that is another story for another day).

Enter Leanne Wood and her vision for Wales, which is spelt out in her impressiveA Greenprint for the Valleys [1], that places emphasis on communities, self sufficiency and respect for the environment.

It really is quite an inspirational read and focuses on the pooling of collective wealth in a community sense and this is something that will appeal outside of the traditional 'large cumbersome state' exponents of most incarnations of a socialist theology.

Yes we can all pick holes in the practicalities of any new economic/political construct but with the right talents to support a remit of localist socialism (Which, believe it or not is closer to true capitalism than the current version we supposedly live under), Leanne's vision is more than practical.

Actually I would say it is essential.

In principle I support many of Leanne's aims and objectives however I would suggest that the propagated lie by Europhiles regardless of ideology that Wales needs to be closer politically to Europe should be openly rejected by Plaid Cymru and instead favour the building of closer trade links with Europe.

In a word. Switzerland.

For too long Wales has lived with a political victim mentality (understandably so considering it's history) and always scratching for handouts from Europe to fund new projects when full independence offers the opportunity for, dare I say it, a Welsh currency and greater inward investment if said currency is backed by gold.

If Wales demanded that a portion of all oversea's exports were paid for in physical gold which would constitute as a percentage of the tax take then Wales would automatically be building up a reserve of gold under which a new currency could be legitimised.

However these should be the headaches of economists set to achieve a social aim and not to ensure that multinational concerns are able to exploit a workforce.

And a final word on Europe, it would be a tragedy to see Wales gain independence and self autonomy only to hand back the bulk of powers to corrupt overbearing rule in the form of the EU as opposed to Westminster.

Trade agreements will be more attractive to nations separate from a collective of member states that are struggling to maintain cohesive financial trade.

One of the biggest problems affecting people in Wales is the affordability of homes. Don't believe the hype, there are plenty of empty homes its just the price tag that prevents occupation and not the lack of supply.

Another problem is the amount of second homes in Wales, which should be discouraged with vigorous taxation of second homes from occupants outside Wales. This would free up even more houses but would not sort out the affordability of those houses.

That would require some progressive thought regarding:

a. The morality of the financial institutions holding a population to mortgage servitude.

b. A heavy levy on property capital gains or some incarnation of a land value tax.

d. Promotion of low impact housing such as Simon Dale's in Pembrokeshire

If Plaid has the balls to initiate a transition from where we stand today to a new Wales then it will need economists to come on board with a remit to ensure that the road to a localist/socialist Wales is not too bumpy a road. 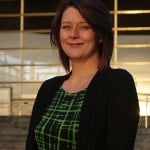 Maybe I have spelled out more my vision of Wales than that of Leanne Wood, but I hope this is not the case because now could be a time to get very excited about living in Wales.

I have an uncomfortable question for the people of Wales. Outside of international games of rugby and football, what else do we get passionate about?

Well the answer is this. Not much and that is because the dream of independence seems like a fairy tale consigned to the history books after years of having our culture and language marginalised.

Better to forget the dream.

Don't give up hope, Wales is a large land in relation to it's population so who owns that land and the distribution of land to population be distributed? How productive is its usage? How can productivity be increased and how can we make sure it is handed down to our children in better shape than when we inherited it.

Leanne, you have work to do.