According to a new documentary, Play School presenters were completely stoned on aired children'sÂ television broadcasts in the 1970s.

ReferringÂ to a nativityÂ sceneÂ in Play School, Ball reported fellow presenters Lionel Morton and Rick Jones as having smoked a huge joint before recording and described them as beingÂ altogetherÂ stoned.

73 year old Ball hastened to add that he himself did notÂ indulgeÂ in the drug taking and found itÂ intolerableÂ to work with.

Even David Attenborough was rather unamused at the smell of pot in the corridors of the BBC albeit with reference to musicians from pop groups smoking the class B drug.

But smoking cannabis was not the only sign of a generation hell bent on drugÂ experimentationÂ in the BBC televisionÂ centre, there was also free love.

Katy Manning, who was an actress on Doctor Who, said there was casual sex all over the BBC building.

I will never be able to watch old episodes of the Open University again without looking to see if the chap inÂ theÂ brown suit with paisley tie has red eyes.

The subliminal inflections on my generation growing up watching stoned television presenters must have had a negative effect on us. 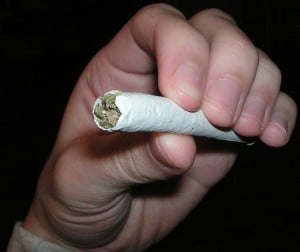 Image by Psychonaught (Own work) [Public domain], via Wikimedia Commons