Firearms officers will be deployed onto the streets of London armed with rubber bullets which they could use against student protesters.

Tomorrow's student fees protest march in London tomorrow has the potential to attract over 10,000 protesters with 4,000 police officers to police the demonstrations.

It is expected that anarchists will try to hijack the proceedings as was the case in previous student fees protests in London and the plastic bullets are hopefully to be a deterrent to any would be trouble makers.

If used this would be the first time that baton rounds or plastic bullets will have been used on mainland Britain and their usage against a civilian population is highly questionable after reported deaths by them in Northern Ireland.

The National Campaign Against Fees organised protest will march to the CityÂ  in London from Bloomsbury as a show of defiance against governmental policy on student fees.

Only recently at the Occupy Oakland demonstrations a cameraman was shot with a plastic bullet as he quietly filmed a line of American law enforcement officers dressed in riot gear.

It is becoming clear that the legitimate right to protest is not what the powers that be want to see on the streets of America or the UK.

We have come to a point where we are prepared to allow rubber bullets (which have the potential to kill and cause serious damage) to be used against our children.

In America two war veterans have been wounded by the police.

Scott Olsen suffered a brain injury and required emergency surgery after a projectileÂ  that was fired at him hit him in the head and Kayvan Sabehgi is in a critical condition with a lacerated spleen after police officers beat him with batons. 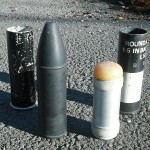 Firing projectiles which reach speeds of over 135mph at someone has a risk element to it yet where is the public uproar?

Must someone die first before we do nothing as per usual because we are apathetic stand up against the injustice sweeping the world.

Our children should not be saddled with debt beforeÂ  they begin their working careers, there is no justification to do so.

David Cameron hasn't got the balls to tackle the banking industry and neither does Nick Clegg nor Ed Miliband, who are just as self serving members of the political elite.

This writer is not a lefty or a right winger or a centre ground biased exponent of political rhetoric, I am someone who finds the British political and economic system wanting.