Monday, July 29 is International Tiger Day, and all over the world people will celebrate the great cat and all that it represents – environmental security, clean air, clean water and clean government.

International Tiger Day is a time to spread the word that saving the remaining wild tigers means saving ourselves – from climate disasters, from the scourges of corruption and organised crime, from a future void of the magnificence of nature.

EIA will be spending International Tiger Day participating in a tiger conservation workshop in China being hosted by the Government, with support from the Global Tiger Initiative and WWF.

It’s an opportunity for our tiger campaigners to engage directly with Chinese officers and decision-makers, to spur them into action against the criminal networks that control the trade. We know from our own investigations and insights into the who, where, what, why and how of the trade, that a lot more could be done to disrupt these networks by using targeted law enforcement. Where there is a will, there is a way. The question is, whether the Government of China will put its money and resources where they are needed.

Demand reduction is an equally important aspect of combating illegal trade, but in China policies which support a parallel legal market for the skins of captive-bred tigers are proving highly counterproductive. This failed experiment is in fact stimulating demand and thus driving the poaching of wild tigers and other Asian big cats.

With leadership, strong supportive policy and collaboration, however, demand reduction campaigns can be successful and this workshop provides an opportunity to focus on a positive way forward. 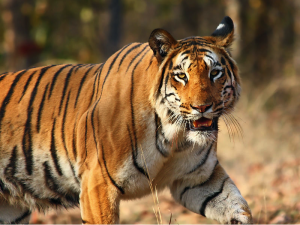 Tiger by Vijaymp via Wikimedia Commons

It would truly be an International Tiger Day worth celebrating if, in this 20th anniversary year of China’s domestic tiger bone trade ban, China extended that commitment to end all trade, in all tiger parts and products from all sources, wild and captive.

Action point: If you want to help make the changes the wild tiger needs, write to your Head of State and urge them to reach out to the new leadership of China, asking that every possible action is taken to end demand for tigers and other Asian big cats, including an unambiguous end to policies which promote trade and putting more investment into enforcement resources to disrupt the major criminal networks controlling international illegal trade.

The cruel exploitation of Tom and Misha

Researchers estimate one in 2,000 people in the UK carry variant CJD proteins

Quarter of Brits Don't Take Every Chance to Vaccinate Themselves