Some people might answer the question ‘what is the best thing about the UK’ with references to the NHS, or to its education system or its armed forces that always punch above their weight. But I would argue that it is, or has been until recently, our democracy.

Democracy is of course not just the preserve of the UK and further, our form of democracy is by no means perfect. But it has served us tolerably well over the last century or so, that is since 1928 when all women over 21 were at last given the franchise to vote.

But having listened to the BBC Radio 4 ‘File on 4’ programme (bbc.co.uk/programmes/b03xf0gt) last night it is obvious that some of our modern electoral practices are more open to fraud than they have been for many a year.

Allan Urry investigated claims of organised vote rigging and File on 4 visited some of the places where widespread postal vote abuse was thought to occur and heard first hand evidence of vote rigging.

The programme also cites a judge who hears election fraud cases who calls the system ‘shambolic’ and ‘wide open to abuse’.

It seems that in our rush to get people to vote we have opted for the easy way out of allowing postal votes to be cast ‘on demand’ with no checks on the process between the postal vote being sent to the elector and it arriving back at the ballot box.

This means that we have absolutely no way of knowing if the voter was under family or cultural pressure when they put the tick in the box or whether that person actually saw the postal form at all. More worryingly the voter may never have existed in the first place. Especially when one person can arrive at the polling station on the day and hand over a stack of envelopes – all perfectly legal. Should we ever get to mass internet voting how will we ever know who is standing at the elector’s shoulder?

The government view is that we should just trust the people and try to root out and punish the few people who do this. But, as the programme pointed out, this is very difficult as you have to prove beyond a reasonable doubt that a specific person actually committed election fraud.

The proper response to the information that File on 4 has unearthed should be for an urgent public inquiry with postal voting on demand shut down until the system is reviewed. 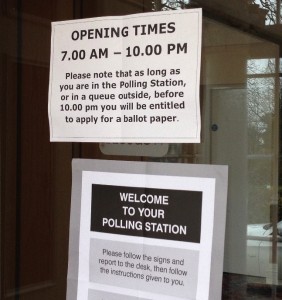 Or maybe we could apply the ‘trust the people’ approach to other areas of our lives. How about self assessment tax returns with no checking at all? Or maybe benefits on demand, surely only a minority of people would abuse that. Perhaps we could abolish speed limits on roads and trust drivers. Maybe no invigilators in exams, after all only a minority would cheat wouldn’t they?

You get the drift, we don’t trust individual people in other areas of our society, so why on earth are we endangering the central core of our democracy with such a woolly policy as postal votes on demand. Well, it does give the winning party the illusion of a mandate if more people are seen to vote, so you can see the attraction – but that is a lazy way out, politicians must learn to engage with the people more, then you’ll get the voters out.

Untold numbers of people have died for our democracy and never forget the Suffragettes. Democracy has been hard won and anyone who can’t be bothered to take an occasional ten minute walk to their local polling station should be thoroughly ashamed of themselves. And only those that can absolutely prove they will not be able to attend should have the postal vote.