Pounds vs. Dollars: Should You Start a Business in the U.K. or U.S.?

There were 526,446 new businesses registered with the U.K. Registrar of Companies in 2013, according to Startup Britain, a private-sector initiative backed by Prime Minister David Cameron. That represented a new national record.

In some respects, the business climate in the United States is moving in the opposite direction. Approximately 543,000 new businesses start up each month in the States, the U.S. Small Business Administration reports—but existing U.S. businesses shut down at a faster rate than new ones start up.

There are pros and cons of establishing a business in either country, but here are a few items to consider for both situations.

As of June 27, one British pound sterling equals $1.70 as the U.S. dollar has steadily weakened against the pound over the past 12 months. Part of this is due to the Bank of England holding steady with its £375 billion ($638 billion) annual asset-purchase program that began in May 2012. The U.S. Federal Reserve has tapered its quantitative easing initiatives since the start of 2014, with the plan of ceasing its asset-purchases completely by the end of the year. 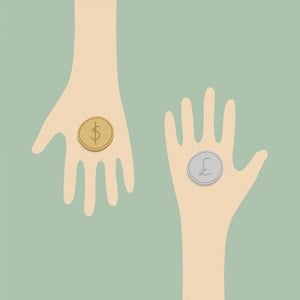 Now is a great time for British entrepreneurs to establish a U.S. business due to simple economics: pounds are more valuable in the U.S. This could ease some of the burden associated with all the fees and regulatory costs to get your business started. Consumer goods and services are also cheaper in America. The cost of a gallon of gasoline in the U.K. (about four liters) has consistently been more than double that of U.S. gas prices since 2012.

American entrepreneurs establishing businesses in the U.K. will benefit from British lawmakers' desire to curtail European Union regulations that complicate the startup process, but more venture capital will be necessary to ensure a smooth transition, as your U.S. dollars will buy less in the U.K.

There is no shortage of eager startup investors on both sides of the pond. Venture capitalists in the U.S. invested $29.4 billion into nearly 4,000 deals in 2013, according to a report by the National Venture Capital Association and PricewaterhouseCoopers LLP. That amounted to a 7 percent increase in total dollars from 2012.

Meanwhile, the British Private Equity Venture Capital Association issued its 2013 Performance Measurement Survey on June 20. It found a 15.7 percent 10-year internal rate of return on all surveyed private venture capital funds. The one-year IRR from 2012 to 2013 was 19.2 percent alone.

The NVCA and BVCA are good places to start when searching for funding in their respective countries. The U.K. government has startup loans that lend an average of £6,000 per approved application. The U.S. Small Business Administration also offers loans small enough to pay your phone plan for a year or large enough to fund your own telecommunications project.

Many large businesses in the U.S. also support small businesses and startups in various ways:

• Intel provides a package targeted toward small businesses that cannot afford the separate pieces. It uses hardware and software tools for backups, updates and maintenance. It is a smaller version of their professional platform, and aims to help small businesses that may be less tech savvy.

• ADP also provides small businesses with different payroll packages. As the website states, "One size does not fit all," and so they offer four different solutions for payroll and tax services.

• T-Mobile offers small businesses their Simple Choice Plan, which alleviates the complexity and cost of wireless devices. It contains unlimited talk, text and Web as well as free business-focused capabilities. And, of course, it does not have annual service contracts.

The Foreign Account Tax Compliance Act of 2010 was passed by Congress in 2010. The legislation guarantees all U.S. citizens doing business in other countries will still pay taxes on their profits even if the host country also is collecting taxes. The U.S. Treasury in early June reported that 77,000 foreign banks have agreed to share all details of accounts held by U.S. citizens at their institutions.

The double-dipping by the IRS makes establishing a business in the U.K. by a U.S. citizen an expensive enterprise. Consult with a tax professional before deciding which country you'll incorporate your company. The most important provisions of the law can be read on the IRS website.

The U.K. is probably more friendly to startups between the two countries; however, the size and diversity of the U.S. consumer population will always make it an attractive business home.

Superdry Showing Growth and Moving into the German Market