· Footfall in September was 2.4% lower than a year ago, down on the 0.9% fall in August. This compares with particularly strong figures a year ago when footfall rose 0.5% in September 2012.

· High street footfall was 2.7% lower than a year ago, falling sharply from the 0.6% decline in August. After five months of positive growth, footfall in out-of-town locations fell 1.3%.

· Footfall in shopping centre locations fell 2.9% compared with a year earlier, the twelfth consecutive month to report a decline in footfall.

· All regions and nations reported a decline in footfall in September. The West Midlands and the South West were hardest-hit with footfall falling 3.5% and 5.5% respectively.

Helen Dickinson, British Retail Consortium Director General, said: "Negative numbers across the UK are clearly a concern this close to Christmas, but there are a few factors at play.

"We're comparing against a very strong September in 2012, when the post-Olympic period coupled with a cold snap unleashed pent-up demand for shopping trips to stock up on warmer clothing and back-to-school items. In contrast, this year's milder September has slowed the uptake of Autumn ranges, a trend reflected in our sales figures last week.

"The sense of tentative optimism is continuing to take hold in the wider economy, but many of us remain cautious and keen to manage our budgets in the run-up to the festive season. Retailers will continue to monitor the mood and respond to customer demand accordingly as they prepare for the all-important countdown to Christmas."

Diane Wehrle, Retail Insights Director at Springboard, said: "Unlike previous months this year, the 2.4 per cent overall decline in footfall recorded in September was a consequence of a drop in customer activity in all three retail environments. Out-of-town was the best performing location type in terms of footfall, which is unsurprising given the fact that the positive sales recorded for September were driven by electrical and leisure goods, and that in-store clothing and footwear sales – the backbone of high street and shopping centre locations – declined over the year.

"The drop in footfall this September was greater than in September 2012 in all three location types, but the greatest fall has occurred in shopping centres – moving from an increase of 1.8 per cent in 2012 to a decrease of 2.9 per cent this year – which clearly highlights the challenges that malls are currently facing in retaining customer numbers.

"Footfall generally declines over the month from August to September in high streets and shopping centres, as spending tails off with the end of the holiday and back to school periods. However, this year the 5 per cent drop in footfall in high streets and 2.1 per cent drop in footfall in shopping centres from August to September was more significant than in previous years, particularly for high streets, which has inevitably adversely impacted the rate of change over the year."

Wales reported footfall significantly above the UK average although it fell 0.4%. Footfall in Northern Ireland fell back in September to -3.1% after a 1.5% decline in August. Scotland reported a significant drop in footfall, down 2.7%, the lowest rate since March 2013. (Click on images to enlarge them.) 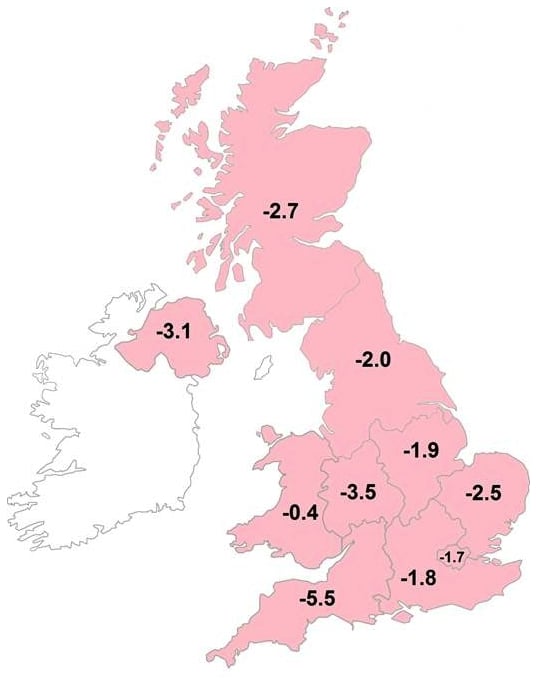 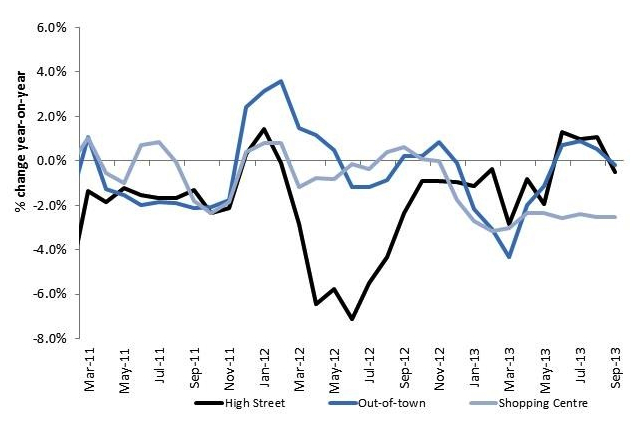