It looks like the price of vanilla ice cream is set to go up by around 10% due to a poor harvest of the spice in both Mexico and India.

The price of vanilla has already climbed 20% in the past few months says the Telegraph with further hikes looking inevitable so pushing up the price of products such as vanilla ice cream. This will of course have come to attention of commodity speculators who will look to profit from this rise so, in all probability, pushing the price even higher.

To give you an idea, prices have recently risen from Â£16 per kilogram toÂ£19 per kilogram. Vanilla is second only to saffron in price where spices are concerned, both being expensive due to the intensity of labour required to cultivate and harvest them.

Vanilla is usually grown within the 20 degree latitude lines either side of the equator in such countries as Madagascar, Indonesia, Mexico, and Tahiti. Around 90% of the world’s production comes from Madagascar and Indonesia. But as it is grown only in a few countries the price can be very volatile as availability changes.

Vanilla is also used in far more products than just ice cream. It is one of the most widely consumed spices in the world and is used in pod, powder and extract forms. Apart from food it has also been used medicinally and in aromatherapy. 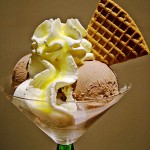 But the spice does have another side, not only was it once considered as an aphrodisiac its use has been shown to increase the levels of catecholemines (including adrenaline) so can be considered as mildly addictive.

At the end of the day more expense for our hard pressed families as summer approaches.