Indian buyers have become the second largest purchaser in Prime Central London, accounting for 22% of sales.

This represents an increase from 5% of sales two years ago before rules were relaxed around the amount of capital which Indian buyers could remove from the country. In terms of value, Indian buyers represented 1/3 of the total spend. Their average purchase price of £1.77m is slightly higher than the market average of £1.6m. In contrast, the number of buyers from continental Europe has fallen significantly due to increased uncertainty following the UK’s Brexit vote, from 24% two years ago to 7% over the last 12 months.

Following 2015’s changes to the Liberalised Remittance Scheme in India, which increased the capital which buyers can bring into the UK to $250,000 per person, Prime Central London has seen a notable surge of purchases from wealthy families from the region, who now represent the second largest nationality in the marketplace. 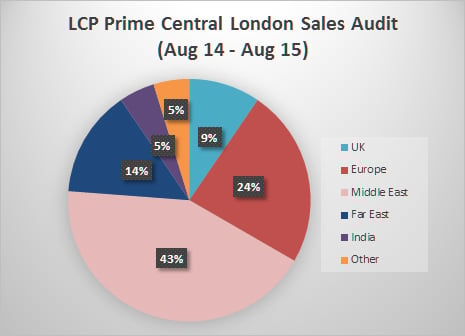 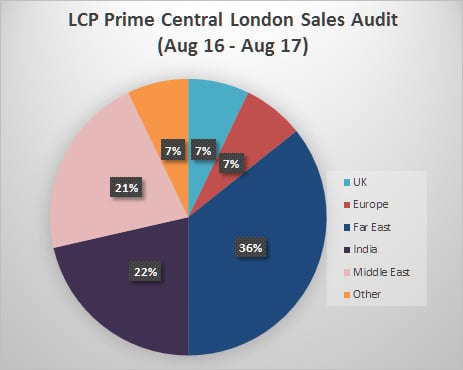 According to London Central Portfolio’s (LCP’s) latest sales audit, buyers from the Indian subcontinent represent 22% of purchases in PCL, an increase from 5% two years ago, before the change in the system. The average purchase price by Indian buyers at £1.77m has also overtaken the market average of £1.6m, with buyers from the region representing 1/3 of the total spend in terms of value.

The increased interest from Indian investors has not only come from private individuals but has also been reflected in a move from institutions and developers from the subcontinent who have been buying up large tracts of the capital. In 2014, Mumbai-based Lodha Group acquired the Canadian embassy in Mayfair for $530m, alongside New Court on Carey Street, announcing plans to become one of London’s biggest investors with a planned $5bn spend. Another investor, Indiabulls, also entered the market, investing £155m in Hanover Square.

“Despite two years of slower price growth due to tax headwinds and the UK’s Brexit vote, Prime Central London has remained attractive to international buyers as a safe haven asset class with the rule of law and proper title to property. As India has become a more challenging place to invest in with high loan interest rates and rising prices in the main urban centres, together with increasing global political and economic uncertainty, Indian buyers with a larger amount of capital to spend have increasingly turned to London as an investment destination of choice. As sterling has weakened against foreign currencies, representing a 20% discount for USD denominated investors compared with two years ago, we are now seeing Indian buyers becoming an increasingly dominant force in the marketplace. They have overtaken buyers from the Middle East who have fallen to third place.”

The increase in Indian buyers, however, has been set against a significantly decreasing number of European investors following the Brexit vote, according to LCP’s audit. Representing the second largest nationality two years ago, buyers from continental Europe have plummeted with their share of the market falling by over two thirds.

“In large part due to significant increases in taxation, sales volumes in Prime Central London have fallen across the board, down 41% in Q1 to just 3406 sales annually compared with the previous year. The most reduced pool of buyers, however, have been those from Europe who have adopted a ‘wait and see’ attitude as Brexit talks continue. As the group most impacted by the outcome of the UK’s exit from the European Union, a bounce back amongst these investors will very much depend on the result of on-going negotiations” explains Heaton.

FDIC-Insured Institutions Earned $40.2 Billion in the Second Quarter of 2014