− Pace of job creation ticks up to near two-year high

− West Midlands leads growth of both output and employment, while North East remains worst performing region for these measures

Business activity in England continued to grow steadily in August, outstripping the rates of expansion recorded in Scotland and Wales, according to the latest Lloyds Bank Regional Purchasing Managers’ Index (PMI).

England’s business activity index – a measure that tracks changes in the total output across the manufacturing and service sectors – registered a reading of 54.5 in August, rising slightly from July’s 54.4 and remaining broadly in line with the historical average.

The Lloyds Bank Regional PMI is based on businesses in the manufacturing and service sectors and is the leading economic health-check of regions across England, Scotland and Wales. A reading greater than 50 represents growth in business activity, while a reading below 50 indicates a contraction. The greater the deviation from the 50 mark, the faster the rate of change.

Wales meanwhile saw slower growth of output in August, with its business activity index dipping to a four-month low of 54.1, from 55.7 in July. Scotland (52.2) also recorded a weaker rate of business activity growth midway through the third quarter, with the pace of expansion slowing from July’s 33-month high.

The fastest growing region in terms of private sector output was the West Midlands (58.6), which regained the top position from Yorkshire & Humber (58.1). Notably, the South East (53.3) saw a further loss of momentum as growth slowed to an 11-month low.

The West Midlands and Yorkshire & Humber also recorded the strongest rates of employment growth during August. The pace of job creation at the national level was in fact the fastest seen for almost two years. All regions recorded higher employment except the North East, where staff numbers fell slightly for the second month running.

Elsewhere, August survey data showed a further increase in inflationary pressures, with average prices charged for goods and services rising at the fastest rate for four months along with strong growth in businesses’ costs.

“Business activity continued to rise at a steady pace across the country in August. The good news was that job creation reached the fastest rate for almost two years, with employment rising in all regions bar the North East. 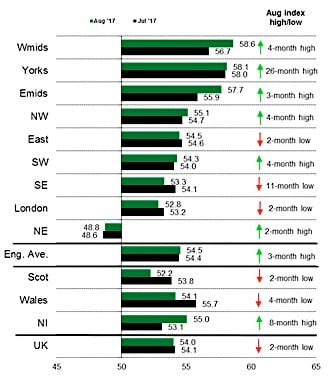 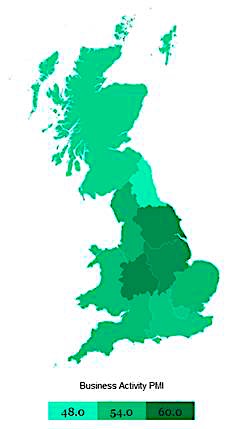