A new report examining possible mechanisms for future international legal trade in ivory has proposed the creation of an ivory sales body modelled on the De Beers diamond cartel.

The report, Decision-Making Mechanisms and Necessary Conditions for a Future Trade in African Elephant Ivory, is to be discussed at the 62nd meeting of the Standing Committee of the Convention on International Trade in Endangered Species (CITES), in Geneva, Switzerland from July 23-27.

But the London-based Environmental Investigation Agency (EIA) accuses the authors of failing to fully comply with the terms of reference and of effectively loading the dice to produce a report clearly biased in favour of creating a global trade in ivory – despite 2011 being branded the worst year for elephants since the current ivory trade ban was put in place in 1989.

EIA has been investigating the illicit ivory trade for more than 20 years, and believes any ‘legal’ trade in ivory sends mixed messages which confuse consumers and provides an opportunity to launder black market ivory onto the market.

There is no evidence to indicate, as advocates of trade predicted, that supplies of ivory derived from ‘legal’ sales of stockpiles in 1999 and 2008 have either satiated demand or reduced prices to the point where poached ivory has become financially untenable. In fact, the opposite has happened, with demand stimulated and poaching out of control.

“In addition, the availability of ivory from both legal and illegal sources further challenges law enforcement agencies in their efforts to tackle the criminal networks behind the trade. In light of mass poaching of African elephants, the increase in illegal trade in ivory and the fact that the legal sales have clearly failed to reduce illegal trade, EIA urges the Standing Committee to shelve any further discussion on a future international trade in ivory.”

EIA strongly recommends that the Standing Committee rejects the recommendations of the report for failing to address the core issues identified in the terms of reference and the fundamental reasons for the failure of the current legal ivory trade system. Instead, the committee must call for a review of the enforcement gaps and needs that have led to the failure of the current ivory trade control and regulation system.

“The consultants behind this report are seeking to put in place a mechanism for decision-making without providing or discussing vital information such as the ecological sustainability of an international ivory trade, the impact of such a trade on illegal killing, enforcement challenges and linkages between legal and illegal trade,” said Rice.

During the 1980s when legal trade in ivory was allowed, the African elephant population declined from 1.3 million to 600,000 in a decade.

"Parties to CITES must recognise that in the current climate of poor enforcement, lack of resources, failure of political will and corruption, there is no likelihood that any form of regulated trade could be workable and this document certainly should not provide the basis for any further discussion on this issue,” added Rice. 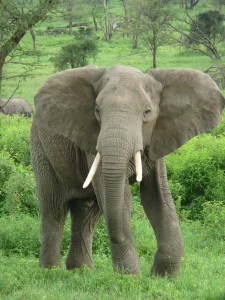 Elephant near ndutu by nickandmel2006

Image by nickandmel2006 on flickr [CC-BY-SA-2.0 (http://creativecommons.org/licenses/by-sa/2.0)], via Wikimedia Commons

The worst US oil spill ever