The latest house price index from Rightmove shows that the average asking house price has increased 1.6% month on month and by 2.2% over the last year.

The Rightmove average asking price for a residential property now stands at Â£233,252 and the 1.6% increase in vendor’s asking prices equates to a rise of Â£3,687.

The first quarter of 2012 has also seen a 4.9% increase in house asking prices, which is the largest first quarter rise since 2004.

The average for the country does however pale into almost insignificance when you consider that the Rightmove average asking price for Kensington and Chelsea is a whopping Â£2,000,120.

Rightmove says that early indicators point towards a ‘more robust’ 2012 than the market experienced in 2011. But it does ask whether the end of the stamp duty holiday will see a dampening in demand as the year progresses – unless of course the Chancellor stands at the dispatch box and changes things in his budget speech in a few minutes.

Miles Shipside, director of Rightmove said “For a first-time buyer it’s already hard enough to raise the necessary deposit and now, as well as potentially losing between Â£1,250 and Â£2,500 in stamp duty exemption, asking prices for their target property types have increased by over Â£5,000 in the last year as well. The stamp duty holiday was designed to promote activity in the moribund housing market, helping first time buyers to get onto the housing ladder, and as a consequence releasing others to climb up the rungs too. With some promising indicators of activity so far in 2012, there are finally some signs that this is playing an important role. The question is: can the Chancellor afford to spring a surprise and extend the stamp duty exemption? If not, what are the potential costs of leaving the UK re-sale property market without any incentives?”

Although we have seen this recent blip upwards it may well just be that, a blip. When you look at the graph below you will see that over the years the Rightmove asking price has been flat overall with the trend, if any, being a very slight reduction. 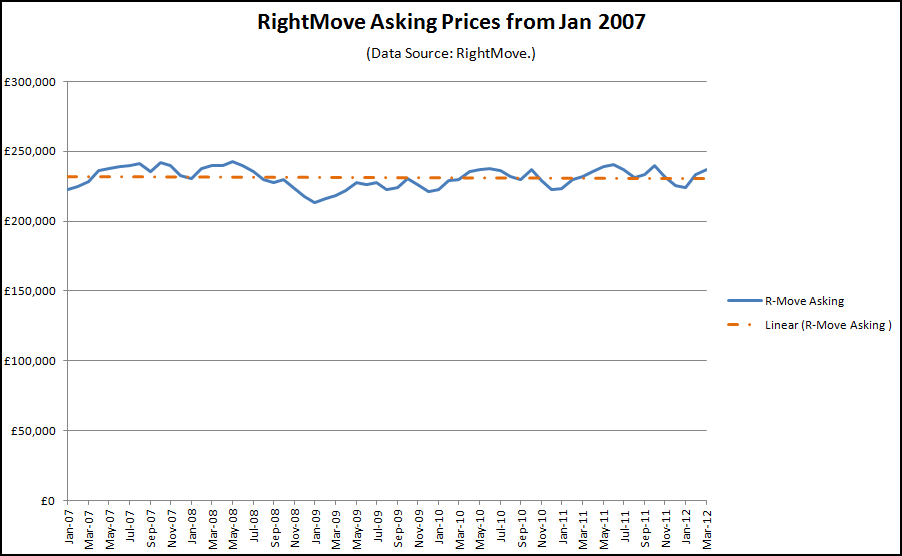 It is also worth noting that Rightmove asking prices are overall about 40% higher than the prices people actually pay according to the three main related indexes – Land Registry, Nationwide and Halifax.