The property industry has hit back at misleading claims that leasehold property will be covered by the Government’s new flood insurance scheme, Flood Re.

The British Property Federation (BPF) spoke out after the Association of British Insurers (ABI) claimed on Wednesday that “Flood Re will cover domestic properties, regardless of whether leasehold or freehold”.

The BPF again urged Government and the insurance industry to think again when the Water Bill is debated on Monday, after it emerged that more than five million homes and four million small businesses would not have access to Flood Re, the scheme providing access to affordable flood insurance.

Under Flood Re, any insurance deal that is considered ‘commercial’ will be unable to access affordable flood insurance. Because the majority of leasehold properties require insurance to be bought on a block basis, that building insurance is considered to be a commercial deal and so will not covered in the new proposals.

“It is misleading to suggest that the majority of the leasehold sector will be able to get buildings cover through the current arrangements for Flood Re. The ABI’s response does not take into account how leasehold works. 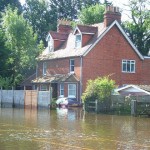 “People who live in leasehold properties will be able to insure their contents, but that will be cold comfort to them if they cannot afford to repair the structure of their home, replace their kitchen or mend their pipes and electricity cables.

“The vast majority of flats are leasehold and insured on a block basis to ensure that there are no gaps in cover. This is a necessity for all leases, whether in a block of four flats or 400 flats. We would urge the ABI and Government to rethink this aspect of their proposals.”

Official census data shows that there are 3,137,000 homes in the private leasehold sector, and 773,000 leasehold conversions in former houses, which are likely to be in small blocks run by leaseholders and may not have the muscle to obtain affordable flood cover if they are in flood-prone areas.

The BPF is urging the government to take this into account ahead of the second reading of the Water Bill in the House of Lords on Monday 27th January.

The ABI made its response to a statement issued by the BPF on 21st January 2014, which voiced its concerned about the large swathes of the property industry which will not have access to affordable flood insurance.

Can This Precious Metal Save Your Portfolio from the Rising Tensions in Crimea?

Theresa May: fix our sights on the future and vote for fairness, security and opportunity for all