In a letter to today's Financial Times, a coalition of some of the most influential organisations in the housing and property construction sector, including London Councils, the British Property Federation and the Royal Town Planning Institute, have called for rules stopping councils undertaking measured borrowing to be lifted.

The acute housing crisis needs addressing urgently. London alone requires 249,000 new homes by 2020. Investing in housing addresses this shortage and is an effective way of boosting growth: for every Â£1 invested by the public sector in construction, 56p returns to HM Treasury.

The House of Lords is today debating amendments to the Growth and Infrastructure Bill. Amendment 39, supported by Peers of all political persuasions, would remove restrictions on councils borrowing – the Housing Revenue Cap – and allow local authorities to finance the construction of new homes by borrowing against their assets. Up to 60,000 new homes could be paid for by removing it.

The letter, led by London Councils, which represents London's 33 local authorities, calls on the government to remove this cap. It points out that as well as easing the housing crisis, the move would be good for growth and could create 19,200 jobs, cutting unemployment and welfare dependency. Signatories include councils, business groups, developers, academics, professional bodies and housing charities. 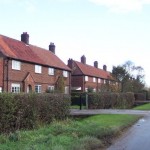 British Property Federation Chief Executive Liz Peace said: “Local authorities are absolutely critical to meeting Britain’s housing challenge. The most innovative are considering how they can expand their housing stock, and invest, often in partnership, to deliver a range of needed tenures.

“Removing the arbitrary cap on borrowing would allow local authorities to raise funds for housing at a time when developers’ ability to do so is increasingly constrained. Ultimately, this is not about asking for Government subsidy, but simply the power to borrow more in a sensible way, to invest our communities and our economy.”

ECB Calling U.S. Out on Its QE Mistakes