More than one thousand protestors occupied the London square in front of the European Union’s UK base today as part of nationwide demonstrations against the trade deal currently being negotiated between the EU and the US.

Protestors took over Smith Square, the Westminster home of Europe House, between 1pm and 3pm, demanding an end to talks on the Transatlantic Trade and Investment Partnership (TTIP).

David Cameron is pushing hard for the deal, which critics have described as a ‘corporate power-grab’. Negotiators will meet in Brussels on Tuesday 15 July in an attempt to reach an agreement on the most contentious proposals in the deal.

Protestors in London staged a ‘People v. Big Business’ football match with the odds stacked in favour of the business team. The demonstration also featured ‘corporate’ puppeteers on stilts manipulating public sector ‘puppets’ to highlight the threat the deal poses to public services. 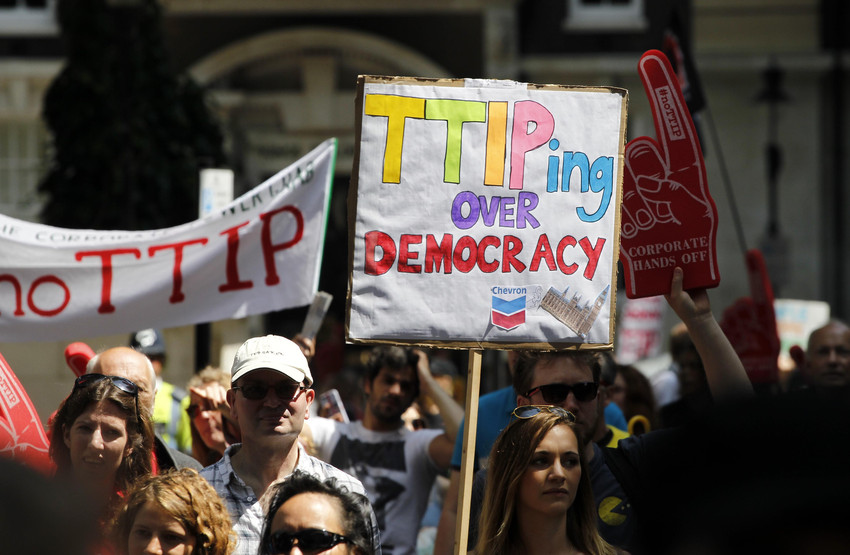 Opponents of the deal believe it threatens to bring increased privatisation of public services, the slashing of food and environmental rules to match much lower American standards, and up to a million job losses across the UK, the rest of Europe and the US. The deal would also hand big companies significant new powers, allowing them to sue governments for decisions they believed might reduce their profits.

“This deal would hand multinational companies unprecedented powers over life in this country, including the ability to sue a future government for billions of pounds if they didn’t like its decisions. David Cameron waxes lyrical about national sovereignty, but in pushing for this deal he is wilfully handing sovereignty to big business. The deal is not really about trade, it’s about entrenching the position of the one percent. It should be abandoned.”

The protest was supported by more than 50 groups including the World Development Movement, Unison, Friends of the Earth, the Green Party and Occupy London. 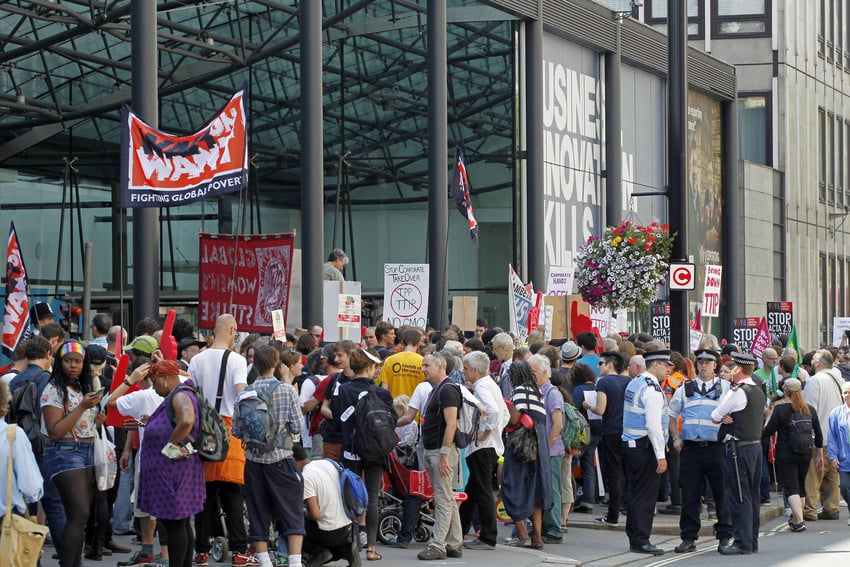 “The proposed deal threatens to blow apart the power of our democratic decision making. TTIP is a huge threat to hard-fought-for standards for the quality and safety of our food, the sources of our energy, workers’ rights and our privacy.

“The harmonization of food standards is particularly concerning. Under the deal food products include chemically washed poultry, livestock treated with growth hormones, and genetically modified crops – all allowed in the US – could be sold in the UK.”

“There is no guarantee that TTIP will be good for job creation – let alone decent jobs that pay enough to live on, respect labour rights and promote high health and safety standards. Why should we assume those standards will be upheld when other standards are likely to go down? These are the standards seen as barriers to business and TTIP is all about promoting business.”

“Though huge chunks of this trade deal are shrouded in secrecy what we do know is that TTIP poses a very real threat to the quality of life of people in the UK.

“This deal, favoured by multinationals, threatens to slash regulations that protect our environment and health. But, most worryingly, it represents a serious threat to democracy in our country.

“It’s astounding that the Lib Dems, a party with the word ‘democrat’ in their name, are attacking those who want to protect Brits from a trade deal written by big business.”

“Greens are totally opposed to TTIP, which threatens to undermine our ability to protect the high standards of environmental protection, employment rights, and animal welfare that we take for granted.

“The proposals to protect corporate investors against the democratic interests of citizens must not be allowed to stand. As Greens in the European Parliament we pledge to do everything in our power to prevent TTIP from being agreed.”

Magna Carta matters more than ever