Big demonstrations have spread from the Sahara to Algiers, after Algerian authorities announced the drilling of the first shale gas well in the country.

Tens of thousands joined anti-fracking protests and marches across Algeria, after the government announced the drilling of the first shale gas well by Total near In Salah. Protests spread from there to Tamenrasset, Ouargla, Ghardaia, Illizi, Adrar, Timimoun, Bordj Baji Mokhtar, Ain Beida, Oum El Bouaghi and Algiers.

The scale of the public opposition took the government by surprise, and threatens future plans to frack by multinationals including Total and Shell. A sit-in in Algiers was forcibly dispersed and a dozen protestors arrested. Discontent with fracking has been bubbling in Algeria for some time, but these are the first large-scale protests.

News reports have emerged that President Bouteflika might have announced a moratorium on drilling. This remains unconfirmed, and government announcements are often manipulative and unreliable. 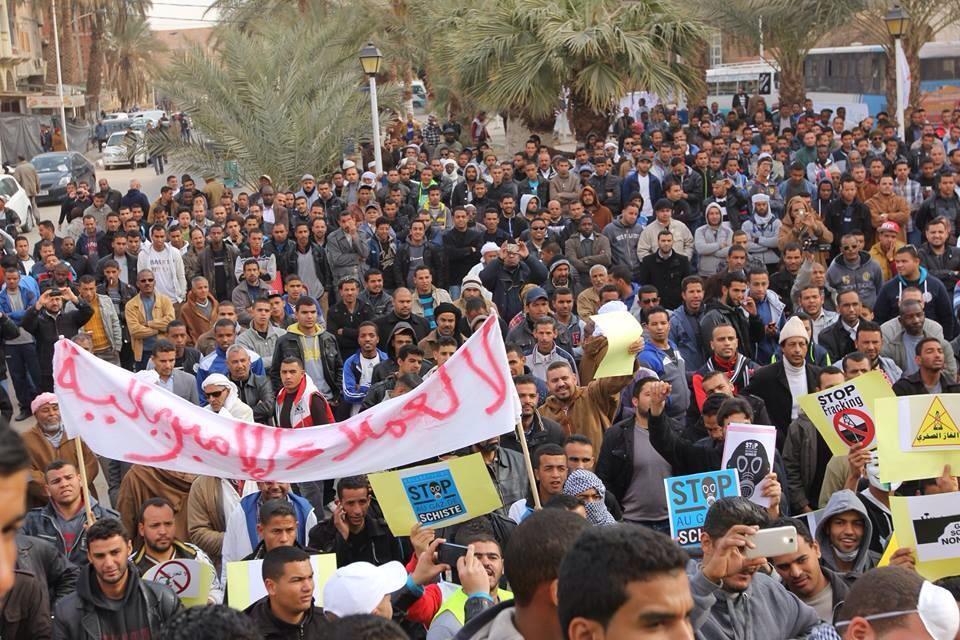 Initial anger is focused on the government and Total, Sonatrach and Partex, the oil companies involved in the first well in the Ahnet basin. There is frustration that while Total is banned from fracking in France, the French government is encouraging fracking in Algeria.

BP and Statoil are also affected, as the oasis town also hosts their In Salah joint venture with Sonatrach, one of the largest gas projects in the country.

The huge protests are demanding the halt of all shale gas operations and a national debate on the issue. This was an existing demand before the Jan 2013 amendments to the hydrocarbon law, that enabled exploitation of unconventional hydrocarbons in Algeria.

The mobilisations reflect a deeper discontent at the ongoing exclusion of the Algerian people from public decision-making, and the long-standing socio-economic marginalisation of inhabitants of the oil and gas-rich Sahara, which provides the bulk of Algeria's resources and income.

"Fracking will have disastrous consequences for the Algerian desert. It threatens scarce water reserves and provides a new rent for the authoritarian Algerian regime that oppressed and imprisons the Algerian people. The British government and British companies are supporting this push to exploit Algerian shale gas. No multinationals should be allowed to frack in Algeria and we stand in solidarity with the inspiring resistance movement in Algeria."

"British and French oil companies now want to frack Algeria, threatening desert livelihoods and destroying the climate. This new uprising is our best hope at stopping these dangerous plans. Once again, BP and Shell are on the side of autocrats not the people."