In a world where genuine revenue and earnings growth is a tough thing to come by, the company with the iconic "swoosh" did so with flying colors. NIKE, Inc. (NKE) is a business that continues to defy its maturity as a brand.

The company posted 2014 fiscal first-quarter earnings that beat Wall Street consensus, with revenue growth coming in at a solid eight percent with no significant impact from currency translation.

The company was able to increase its gross margin substantially and total earnings grew an impressive 33% to $780 million. Diluted earnings per share grew 37% to $0.86 a share on one percent less in weight average diluted shares outstanding.

NIKE purchased 8.4 million shares of its own common stock in its fiscal first quarter for $526 million, and its cash position soared $2.3 billion (after a debt issuance and the sale of Cole Haan and Umbro) to $5.6 billion.

With such strong numbers and such a solid cash position, I'm actually surprised the company didn't effect an increase to its quarterly dividends. The company raised its dividend at the end of last year, and management may do so in the next quarter; the business can certainly afford it.

NIKE has been able to get away with price increases without affecting demand, and with strong expense control, the extra margin goes right to the bottom line.

The company had a very successful fiscal 2012 fourth quarter, and its operational momentum continues. The stock is at an all-time record high, with a current dividend yield of just over one percent; but like most successful enterprises, the company's share price is often trading at new highs.

This business is worthy of consideration when it pulls back on the stock market. The position really hasn't had a major period of consolidation since back around 2000. The company's latest quarter was a standout. 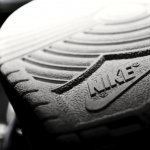 In the retail landscape, brand power matters and NIKE continues to execute tremendously well. Excluding changes in currencies, the company said that global orders for its NIKE-branded footwear and apparel for delivery from September 2013 through to January 2014 is up eight percent compared to the same quarter last year. It's therefore reasonable to expect the company to post another solid quarter of revenues and earnings growth. Earnings outlooks from major Wall Street firms are very likely to improve over the coming weeks. (See "What NIKE's Earnings [To Be Released This Afternoon] Could Reveal About This Proven Wealth Creator.")

I always follow NIKE for its financial results. I use it as a benchmark stock on consumer retail spending. While the stock is fully priced, it's earned the right to be, with such impressive growth in a still slow-growth environment.

The only low point in NIKE's business currently is China. But this was widely expected, as company management already guided accordingly. NIKE is a solid long-term holding to consider for any equity market portfolio.

The European Union wants more of your money