Los Angeles in 1949 is a city dangerously rife with corruption and finding itself increasingly under the control of mobster Mickey Cohen (Penn). In an attempt to break the influence of organised crime within the City of Angels, a high ranking Police Chief (Nolte) enlists the services of war veteran and honest cop John O'Mara (Brolin) to recruit a covert team of honest law enforcers.

Their brief is simply to take down the racketeer and break the stranglehold of crime, by any means necessary.

Director Ruben Fleischer is perhaps best known for the comedy action horror Zombieland (2009), whilst his latest feature finds an abundance of submachine guns and fedoras appearing alongside an all-star cast as the filmmaker pays homage to the classic crime epics of yesteryear.

But can this new take on a tried and tested formula incorporating modern movie techniques and the presence of the ever memorising Sean Penn ensure that Gangster Squad is a success?

Fleischer knows that the necessary camaraderie must be seen to exist between his assembled team of good cops to not only hold the attention of the viewer but also to ensure that the audience has someone to root for.

Ensuring that Nick Nolte adds some gruff and heavyweight moral presence with his portrayal of Police Chief Bill Parker, the director quickly turns his attention to perhaps the most pivotal relationship in the film as good cop Brolin teams up with quirky cop Rosling to form the basis of the movie's odd couple relationship.

Brolin plays it straight and troubled as war veteran and morally upright cop John O'Mara whilst Rosling seemingly has a whale of a time donning his fedora and portraying the disillusioned womaniser Jerry Wooters.

Added to the mix is indie favourite Giovanni Ribisi who continues his trend for playing offbeat characters as his family man and surveillance expert joins rank alongside raising star Anthony Mackie in the war on crime.

It is a likeable ensemble that works well on screen and does indeed find the viewer caring for the each member of the covert police operation but more often than not the narrative is let down by a lightweight script and a slick running time that eschews any exposition in favour of a quick cut to the chase.

The fast editing and often almost glorified comic book treatment of the violence found within the opening segment of the film seem almost like an exercise in dumbing down a subject matter whilst some of the night time vistas of Los Angeles often appear artificial and animated in appearance.

Sean Penn seems almost on a mission to top Robert De Niro and his memorable albeit over the top portrayal of Al Capone in The Untouchables (1987). Penn and his psychotic take on real life mobster Mickey Cohen increasingly become one dimensional with each passing scene and steer close to the realm of pantomime. 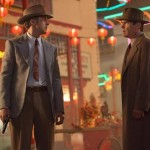 Little or no insight is given into the motives of the gallery of gangsters and corrupt officials who inhabit the world of the crime boss whilst Emma Stone is given little or no back-story to portray femme fatale Grace Faraday.

Perhaps we are simply lead to believe that Faraday is merely a drifter or social climber, an inhabitant of the inner circle of Cohen and ultimately the magnet for the romantic interests of Rosling's socially adept cop.

But without the foundation found in a back-story or the time invested in a character, it is hard to show any interest for Faraday and although watchable, the performance by Stone is never allowed to compete with the classic femme fatales of yesteryear such as Kim Basinger in L.A. Confidential (1997) or Faye Dunaway in Chinatown (1974).

Although likeable, Gangster Squad ultimately feels lightweight and almost throwaway when compared to the classics of the genre such as Curtis Hanson's complex and highly stylised L.A. Confidential (1997) or the epic scale of Brian De Palma's The Untouchables (1987).

Enjoyable, but no heavyweight.

Bored To Death – a review