The latest data on public finances show that public sector net borrowing continues to run lower in 2013/14 than a year before. Once the effects of one-off measures are removed, net borrowing excluding financial interventions and stood at £11.1 billion in September 2013, down from £12.1 billion in September 2012. Looking at cumulative borrowing for the first six months of the fiscal year and the government has borrowed £56.7 billion, compared to £62.6 billion for the first half of 2012/13. If borrowing for the remainder of 2013/14 continues below what it was in 2012/13, it is likely that total borrowing for the year will come in less than the Office for Budget Responsibility's (OBR) March 2013 forecast of £119.8 billion.

The strengthening of public finances compared to a year ago was helped by notable upticks in tax revenue due to the strengthening of the economic growth outlook. Total receipts increased year on year in September 2013 by 7.0%, and for the fiscal year to date by 8.3% on the same period in 2012/13. The most significant driver of this was an increase in income and capital gains taxes, which rose year on year by 11.9% in September. Meanwhile, taxes on production increased 4.8% in September 2013 compared to the same month a year ago, with VAT receipts growing by 4.1%.

These buoyant figures for growth in receipts are in contrast to spending data. Central government current expenditure was just 2.5% higher in September 2013 than a year before, and just 2.4% higher for the fiscal year to date. However, the fact that spending is still rising roughly in line with inflation illustrates how the coalition has postponed significant real budget cuts until after the 2015 election – Cebr expects government expenditure to be broadly unchanged in real terms between 2012 and 2013.

With economic recovery coming in stronger than previously expected, tax revenues are seeing rapid growth and are likely to give better results for the fiscal year than the OBR and the Chancellor had thought. However, the latest figures also show that government spending is proving difficult to cut in real terms. The need to curb government spending going forward is expected to weigh down on the pace of economic growth beyond 2014. 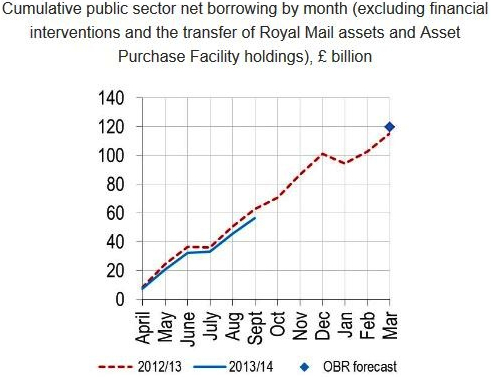