Public health needs a radical shake up if it is to enable good health to flourish, say experts on bmj.com.

Professor Gerard Hastings from the Institute for Social Marketing at the University of Stirling argues that marketing by multinational corporations “threatens our mental wellbeing, exacerbates inequalities, and encourages unsustainable consumption.”

Professor Tim Lang and Dr Geof Rayner, from the Centre for Food Policy at City University in London, add that ecological public health – which integrates the material, biological, social and cultural aspects of public health – is the way forward for the 21st century.

Hastings sets out the harm being done to our public health by tobacco, alcohol misuse and obesity. In each case, he says, “evocative promotion, ubiquitous distribution, perpetual new product development, and seductive pricing strategies are used to encourage unhealthy consumption.”

Public health responsibility deals have ensured that corporate capitalism “has gone from strength to strength and is taking over what should be core public health roles, he argues. The consequence has been “the inevitable escalation of lifestyle illnesses such as cancer, heart disease, cirrhosis, and diabetes.”

These are massive problems that demand urgent attention and radical measures, says Hastings.

“Where is the public health contribution to such pressing problems as the corporate takeover of the Olympics – an event which should be a beacon healthy activity not just another shopping opportunity – or the debate about the coalition government abandoning its green agenda, he asks?”

He believes that public health should take a lead in addressing these issues, revitalise its political functions, and regain its role as a champion of the underprivileged.

Public health should also be leading a quest for an economic system that actively promotes better public health, he concludes.

These views are supported by Tim Lang and Geof Rayner, who argue that the pursuit of health and progress “have become tangled up with consumerism as though there are no environmental consequences for health.” 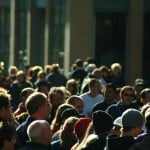 They too refer to the Olympics as symbolising “this world of contrast between the overweight mass and a superfit elite” and they suggest that, instead of an Olympian spectacle, what is needed is “a world in which fitness and sustainable diets are built into daily lives.”

Public health must regain the capacity and will to address complexity and dare to confront power, they write.

They believe that ecological public health is the way forward. “Public health professions today need to think and act ecologically if they are to help reshape the conditions that enable good health to flourish,” they conclude.