Public transport system failing the oldest and most vulnerable in society

The Future of Transport in an Ageing Society [1], a new report by think tank The International Longevity Centre – UK (ILC-UK) and charity Age-UK, highlights the travel problems faced by millions of older people.

• Approximately 35,000 people aged 65-84 in England have difficulty walking even a short distance, but are restricted to using public transport making any journey difficult.

Furthermore the report shows that it is the oldest old, those who are in poor health and those living in rural areas who are let down the most by the current public transport system:

• Among the over 80s less than 55% report finding it easy to travel to a hospital, a supermarket or a post office.

• Among the over 65s who report that it is ‘Very Difficult’ for them to travel to see their GP, less than 30% are in good health.

• Just 20% of those aged 70-74 living in rural areas use public transport weekly, compared to 38% of those who live in an urban setting.

The report argues that with the start of the new Parliament it is time to embrace the opportunities for improvement. In particular, devolution of central Government powers to local communities could mean more flexible transport services which better reflect the needs of older people, while advances in technology, including driverless cars, could further expand older people’s transport options.

“Travel is essential for independent living and has been shown to benefit physical health and mental wellbeing in later life. Furthermore there is evidence that maintaining older people’s mobility has substantial economic benefits, with analysis by ILC-UK estimating that concessionary fares will provide a net benefit to the wider community of £19.4 billion in the years up to 2037. This report, which highlights the travel difficulties facing older people, emphasises the need to adapt our transport system to meet the demands of our ageing society.” 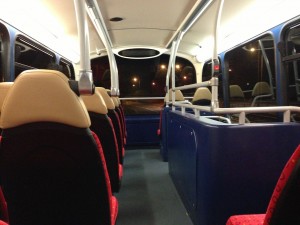 "It is crucial that older people are able to get out and about, especially as the evidence shows this helps them retain their health and independence for longer. Against this context it is worrying that so many older people are struggling to reach hospital, or sometimes even their local GP.

“This report should be a wakeup call because it shows our transport system is not currently meeting the needs of our growing ageing population. The bus pass is an absolute lifeline for many who would otherwise be stranded at home and is utterly essential, but the truth is it's not enough on its own to enable older people to stay mobile.

For example, better transport planning and more imaginative use of volunteers could make a big difference today; and in the medium term 'driverless cars' and other technological innovations could be real game changers."