People around the UK are being urged to take part in the first Great British Bee Count, which starts today (Tuesday 10 June 2014) and runs until the end of August, to help scientists build a nationwide picture of bee health.

Friends of the Earth, B&Q and Buglife have developed a free smartphone app to enable people to easily identify bees and log sightings while out and about, as part of the organisations’ work to reverse the severe decline in bee populations in recent years.

You can download the Great British Bee Count app at App Store and Google Play or record sightings at www.greatbritishbeecount.com.

By reporting the type, numbers and locations of bees they see, people will be contributing data to the National Biodiversity Network, used by experts investigating the plight of bees and the steps needed to help them.

More than 20 UK bee species are already extinct and about a quarter of the remaining 267 species are at risk.

The Great British Bee Count results will be published in the autumn and could help inform action taken by the Government as part of its National Pollinator Strategy for protecting bees and other pollinators.

Bee expert Professor Dave Goulson, author of A Sting in the Tale, said: 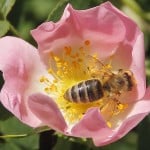 “The Great British Bee Count is a fantastic excuse to get outside and see bees in action – they’re fascinating, beautiful and do a vital job.

“The data that people collect will do an important job to help scientists fill in the blanks about where bees are thriving – and where they’re in trouble.”

People are being encouraged to spot bees on as many occasions as they like up until 31 August 2014. The time period has been chosen because bees are at their most active over the warm summer months when more plants are flowering.

“We hope that thousands of people download the app this summer – the great thing is that you don’t need to be an expert, everyone can get involved and be part of the generation that helps save our bees.

“We want this to become an annual event as it’s a great way for people to learn more about this iconic species and work out the best ways to help them.”

“As the UK’s largest garden centre, we’re proud to be a partner of the Great British Bee Count. We’ve been concerned for many years about declining bee health, which is why we work closely with Friends of the Earth.

“We know how vital bees are to keeping our gardens and countryside healthy and there’s lots gardeners can do, with our help, to support hungry bees, such as planting bee friendly plants, starting a bee café and planting a Friends of the Earth Bee World – all of which you can learn more about by popping into your local B&Q or visiting www.diy.com/bees and www.foe.co.uk/bees.”

How the Great British Bee Count could help bees:

There’s currently no accurate picture of the condition of UK bees. This survey will help scientists answer a number of key questions about particular species, such as:

• As the climate changes, is the tree bumblebee, frequently seen in the south of the UK, now foraging in the north?

• The tawny mining bee builds its nest underground, but what habitat does it prefer? Gardens, allotments, countryside?

• How are honey bees doing around the country? There’s been a lot of concern about the rate at which honey bee colonies are vanishing.

• Bees pollinate 75% of our main crops worldwide, including some of our favourite fruits like apples, strawberries and tomatoes, and textiles such as cotton.

• We have bees to thank for snacks like Bakewell Tart (cherries and almonds are bee pollinated) and popular summer drinks from cider (bees pollinate apples and boost their flavour) to gin and tonic (tonic water is flavoured with quinine, made from bee-pollinated Cinchona).

• An independent study by the University of Reading estimates that it would cost over £1.8 billion every year to pollinate UK crops by hand.

• One of the biggest threats to bees is their food and nesting sites disappearing, with 97% of wildflower meadow habitats lost in the past 60 years.

• The UK has more than 240 species of wild bumblebee and solitary bee. Since 1900 more than 20 species of bee have become extinct – and more than a quarter of those remaining are under threat.

The Future of Wearable Tech for Doctors and Patients