The story of Puerto Rico continues. As expected, last Saturday, 1 August, this U.S. commonwealth defaulted on its $58 Million moral bond. It is a first default of the US territory since Arkansas default during the Great Depression.

From a formal point of view, it might be considered that failure to pay the moral bond will not constitute a default as legally there is no need to repay the bond. Farlex Financial Dictionary defines a moral obligation bond as "A municipal bond or another government bond that is not secured by the full faith and credit of the issuer. Moral obligation bonds carry higher risk and, therefore, a higher yield. However, because they are still government bonds, their interest is usually deductible from federal income taxes" (Farlex Financial Dictionary. © 2012 Farlex, Inc.)

This non-payment is a sign of things to come. Puerto Rico owes its creditors a total of $72 billion and it is now even clearer that it does not have the money to service this debt. The commonwealth's debt burden is equal to almost 95% of its economic output – in comparison, the median debt burden for the 50 U.S. states is 2.4%  (the average in the European  Union is 85.4% and the UK debt is about 86% of economic output – or more, depending on the calculation method). 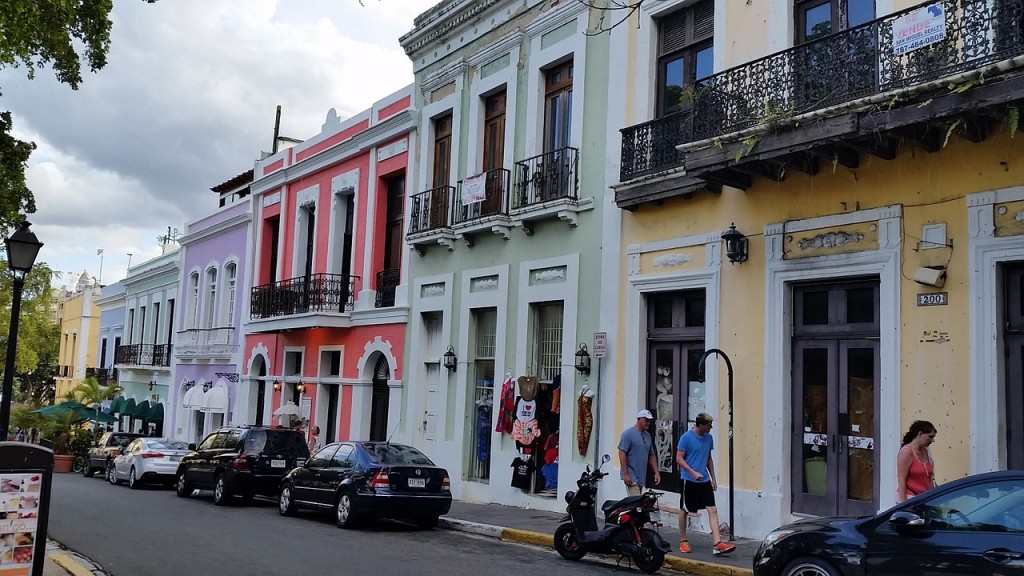 The financial problems of Puerto Rico may affect millions of municipal-bond fund investors. The commonwealth's municipal bonds have been favoured historically by a meaningful number of mutual funds. According to Morningstar data, roughly half of U.S. open-end municipal-bond funds hold some exposure to debt of the commonwealth, ranging from less than 1% of assets to nearly 50% of assets. Including debt held by taxable funds, U.S. open-end bond mutual funds collectively own more than $11.4 billion of the island's debt, or just over 15% of its outstanding issuance.

The purchase of bonds was attractive as Puerto Rico enjoys "triple tax-exempt status," meaning bonds issued by Puerto Rico aren't subject to federal, state, or local income taxes. This triple tax-exempt status – taken together with high yields (from November 2013 the yield to maturity on Puerto-Rican bonds floated between 8 to 12% recently, while for AAA issuers YTM was around 2-3%) – has made Puerto Rico a popular investment for many municipal bonds funds.  It is also worth remembering that Puerto Rico is the American 9th largest issuer of municipal bonds, so it was difficult for fund managers to stay away from all issues.

Nearly 50 U.S. open-end municipal-bond funds representing $43 billion in assets have exposure of 5% or greater to Puerto Rico bonds.  Many of those funds are comparatively small in terms of total assets, but 14 of them had assets of $1 billion or more each.

According to Morningstar, Oppenheimer Funds and Franklin Templeton Investments are two of the largest holders of the commonwealth's debt. The Oppenheimer funds hold some of the heaviest weightings – based on their latest portfolios, 19 of the 20 Oppenheimer Rochester funds had some exposure to Puerto Rico, and 17 had weightings in the double digits ranging from just over 10% of assets to nearly 50% of assets.

Allocations in the Franklin funds, while still meaningful, tended to be smaller. Of the 32 funds in the Franklin municipal-fund complex, 26 funds listed some exposure to Puerto Rico bonds in their most recent portfolios; six funds had exposures of between 5% and 8% of assets. The exception here is Franklin Double Tax-Free Income (FPRTX), which holds over 50% of assets in Puerto Rico debt as of June 30.

There is another group of companies which will be affected by a larger scale default – insurance companies.  The below table presents exposure of the most involved insurers: the key figure is a relative exposure to PREPA (Electric Authority Company) which is believed to have the highest probability of default. 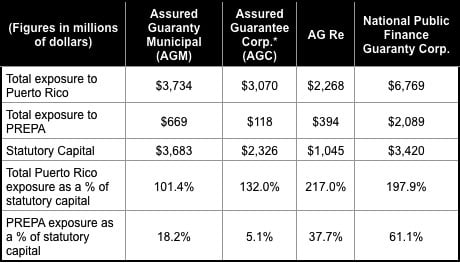 Source CreditSights, as of 1/11/2015. *Note: Assured Guarantee Corp. has entered into an agreement with Radian Asset Assurance that is expected to close in the first half of 2015; the reported figures are CreditSights' estimates assuming the deal closed as of Q3 2015.

What will happen next? Definitively there will be an attempt to restructure the debt. Wall Street reports that a group of Puerto Rico policy makers is already working on a restructuring plan and is scheduled to present their findings at the end of August. Creditors, including mutual funds, hedge funds and other distressed-debt investors, have been splitting into committees based on which bonds they own. PREPA is already in restructuring talks with its creditors. Size of the haircut – well, higher than the current market price: in mid-July a dollar of Puerto Rico bond was worth about 73 cents cash, with a limited number of buyers.

The main point for optimists is that, at $78 billion, Puerto Rico's outstanding debt represents a tiny slice of the overall $4 trillion municipal bond market. If the market reacts in a rational way, individual investors with well-diversified portfolio should not worry, unless they have invested in some Oppenheimer or Franklin Templeton municipal bonds funds or in shares of selected insurance companies. However, it is yet another example of testing the rationality of the market – one day the market might fail this test…

As a general footnote, moral obligation bonds began in New York in 1960 to fund the ambitious government investment programme of newly elected New York Governor Nelson Rockefeller. The "small" problem for him was that the local Congress refused to finance it through more debt and it was clear that any popular vote would yield the same result. Rockefeller approached John Mitchell, a prominent municipal bond lawyer. To avoid the requirement of obtaining voter approval before incurring debt, Mitchell created the concept of the moral obligation bond. With moral obligation bonds, Rockefeller could incur debt for a housing authority and numerous other programs without obtaining voter approval through a bond referendum. For the history buffs, it is the same John Mitchell who was the U.S. Attorney General in the last Nixon Administration and run Nixon's presidential campaign then. For his role in the Watergate affair Mitchell was sentenced for 19 months in jail.

Dr Piotr Konwicki has over 20 years of experience in both teaching and practicing finance. Piotr holds a Ph.D. from Gdansk University, Poland and an MBA from the London Business School.

In his professional career Piotr worked with the following companies:

Piotr was the Project Leader advising Polish Government on the sale of the tobacco industry (the largest sectoral privatization in Central Europe), advised the Lithuanian Government on construction of energy transmission lines, led the purchase of Agip Hotels by InterContinental Hotels and helped create and implement European acquisition strategy for Metsa Tissue.

Piotr is also a visiting Professor of Finance at HULT International Business School in Boston and has published several papers in various professional journals.

Does Tsipras understand what he’s doing?

So This is What we Pay our MEPs for