By all accounts, the situation in Ukraine represents a major crisis for European countries. After former President Yanukovych was voted out of office by the Ukrainian parliament in February, following many deaths in clashes between pro-EU and pro-Russian factions, Vladimir Putin moved swiftly to further destabilise the country. Over the weekend, Western news outlets were reduced to noting that ‘organised armed men’ had captured key strategic locations in the Crimea; we know now these were Russian troops.

There are obvious echoes here with Russia’s invasion of Georgia in 2008. Then, the much larger Russian army invaded after Georgian forces tried to re-capture territory in South Ossetia. Then, as now, the Russians did so under a pretext of humanitarian motives, citing sensible-sounding objectives such as a desire to protect Russian citizens. One difference between then and now is that – at the time of writing at least – Ukraine and Russia are not officially at war.

Putin’s track record suggests very clearly that he is not happy with the way the USSR broke up. Under international agreements from that time, Crimea is part of Ukraine. Its citizens may well wish to break away, or join up with Russia. But the proper way to do that is via political means, as with the Scottish referendum. Responding with military force when the (slight) majority of the population opts for closer ties with Europe, rather than Russia, is a clear signal that the Russian President is a bully who is not prepared to let supposedly free people decide their own fate.

In part, Putin’s aggressive response, like all bullies, may well stem from his own inadequacies. Militarily, Russia still only has two rivals: China and the US. And neither of those look likely to respond in kind. But economically, Russia is increasingly being left behind. Far from transforming into a balanced, well-diversified economy, Russia is still far too reliant on its oil and gas riches in order to prop up growth. The persecution of prominent businessmen has not helped encourage the overseas investment and expertise that is required to transform the economy, and the rampant corruption that still exists colours foreign company’s views of the country. I have yet to attend or present at any Russian conference or meeting where the general consensus has been that the political environment makes investing too risky. The sticking plaster of the Winter Olympics cannot hide Putin’s massive failings as an economic leader. 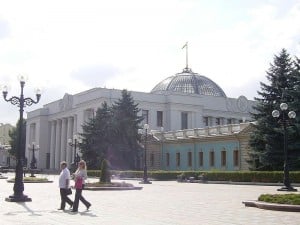 And this may yet turn out to be the long-term cost of Russian intervention in Ukraine. Europe, for all its faults, is still a prosperous and (relatively) happy place. It is also increasingly turning its back on Russia, with the likes of Poland, the Czech Republic and the Baltic states having successfully engineered their freedom. Russian aggression in Ukraine will only amplify those trends.

We have already seen some of the market reaction. The Russian rouble fell to all-time lows against the US dollar and the euro on Monday morning, despite the central bank reportedly spending $10bn – about 2% of its reserves – trying to prop up the currency. The hike in Russian interest rates to 7% is also aimed at preventing ‘financial instability’ – central bank short-hand for begging investors not to bail out of Russian bonds and equities. It will fail: this crisis will do yet more damage to Russia’s prospects of economic transformation.

In the short term, that will be no comfort to the Ukrainians who lost loved ones in the recent turmoil, or now face the prospect of living under Putin’s boot. But the wider hope is that, as Russian citizens realise their leader is not just squandering but actively damaging their future, they gradually demand a real change in direction.

Was the Queen aware of Jimmy Savile's antics?