New York, New York: The needs and concerns of the Palestinian people are not in the news much in the United States. Even though the issues have been around for decades here in the city that hosts the United Nations and where there have been, over the years, persistent resolutions based on allegations of international law violations and apartheid-like abuses in the territories occupied by Israel.

In this same period, there have also been many detailed studies of media coverage that prove that our media rarely covers Palestinian concerns, or features Palestinian perspectives in talk shows or even news programs unless and until violence erupts.

Criticisms of Israeli behavior raised by foreign leaders are also largely ignored unless they are cast as controversies about noisy and invented allegations of anti-Semitism rather than any exploration of the underlying issues that are always treated as matters of contention, not of facts.

Advocates of Palestinian rights and critics of violations of International law seek, often without much success, to call attention to oppressive realities on the ground but not just in an ideological debate.

They want to change a US policy that often marches in lockstep with Israel, in part, because of the power of the Israeli Lobby and regional military calculations.

One of the more visible organizations trying to fill the gap is the Russell Tribunal on Palestine, an ‘international peoples’ tribunal modeled on the initiative by the late British philosopher, Lord Bertrand Russell, an esteemed lecturer, author and moral leader who first created the Tribunal concept in the 1960’s to feature well-known intellectuals to expose war crimes in Vietnam.

I covered that event when it took place in Stockholm with a jury made up of the likes of Jean Paul Sartre, Simone de Beauvoir, Swedish Playwright Peter Weiss and American anti-war activist David Dellinger among other cultural and political luminaries.

It drew global attention and denunciations by the US government and media when Vietnamese witnesses testified about the chemical defoliation of their country, and systematic and often deadly human rights abuses.

I remember American TV correspondent Morley Safer doing a ‘stand-up’ after one session when the audience left, denouncing its allegations of U.S. war crimes and dismissing the Tribunal as nothing but communist propaganda.

Thirty years later, his own news magazine, 60 Minutes, carried reports confirming that there were indeed brutal atrocities being committed in places like MyLai where American soldiers slaughtered innocent civilians including many children. Had Safer not been so eager to discredit Vietnamese experiences back then, something might have been done about the abuses or at least made them known.

Today, the Russell Tribunal focuses on “the complicity and responsibility of various, national and international and corporate acts and the perpetuation of Israel’s impunity under international law”. It seeks to provide a platform for “international personalities who advocate for an end to Israeli occupation and the denial of Palestinian rights.”

It met this past weekend in The Great Hall of Cooper Union where President Abraham Lincoln debated his political adversary in 1860 just as the civil war was building steam.

South African supporters of Israel mounted an angry protest that drew major media attention. Perhaps that’s why the often vociferous pro-Israel lobby in New York stayed away this time, hoping the Tribunal and its findings would be ignored. Perhaps, their members were exhausted by days of screaming at the United Nations.

On the first day of the two day session, the jury heard testimony from Israeli historian Ilan Pappe on the origins of Zionism and its commitment to expel Palestinians before the State of Israel was even born. There were many legal experts on the role of the UN in providing help to Palestinian refugees but rarely defending Palestinian rights. Speaker after speaker denounced the UN for going through the motions and abandoning its mandate because of Israeli and US pressure.

One speaker said the UN had become a “cruel joke” when it came to fulfilling its obligations to Palestinians over the decades.

The audience was cautioned not to applaud and so the whole event tended to be passionless, academic and legalistic. There were long lectures on legal precedents that the lawyers in the room might have appreciated but put some people around me to sleep.

Ironically, no Palestinians spoke at a Tribunal on Palestine on day one. Noam Chomsky, who was due Sunday, apparently came down with laryngitis and had to appear via Skype. The image was as dark as his cough-disrupted presentation that warned the situation is “bleak.”

On Sunday, there were more details of Israel’s history of subjugating Palestinians, evicting them from their villages and then destroying their houses, as if to wipe out any evidence of their existence.

There were presentations on crimes like “ethnic cleansing” and blatant discrimination, a denial of rights and illegal restrictions to criminalize the population and wipe out its identity as a majority group was turned into a minority in a colonized environment.

In the afternoon, there what was described as a “library of anguish”, droning presentations by international lawyers making a case of the need for the international community oppose a disgraceful military occupation finally culminated in a lively debate.

The lone Palestinian “witness”, Saleh Hamayel argued that the situation has to be reframed because it is unique, not quite genocide or an analogue of Apartheid because the whole of Palestinian society is being destroyed intentionally. He offered the concept of “sociocide” as worthy of being considered a crime.

Others disagreed, noting that apartheid is already considered a crime against humanity that can be used as a basis for international action. There was a heated back and forth with most agreeing that both concepts could be invoked even the only one enjoys the support of international law.

One issue I missed: The corruption and collusion of the Palestine Authority with US and Israeli negotiators.

See Clayon E. Swisher's revealing book, The Palestine Papers (Hesparus) for documentation of the story he broke on AlJazeera.

A highpoint of the Tribunal was the brief appearance of the parents of American anti-occupation activist, Rachel Corrie, who was crushed to death by an Israeli army earth moving machine. They insisted there had been no proper investigation as requested by the President of the United States, and condemned an Israeli Court for exonerating the Army

Zwelinzima Vavi, the General secretary of the COASTU labor federation, flew in to express solidarity with Palestinians and criticize the silence of American unions on the issue. Citing Martin Luther King Jr, he blasted the "roaring silence" of US trade unions.

South Africa has an active BDS movement—anti-Israel Boycott, Disinvest and Sanctions movement—which is spreading worldwide. This past week, BDS billboards went up alongside South African high ways. Leaders of the anti-apartheid movement, like Archbishop Desmond Tutu, have endorsed the campaign.

What was impressive were the many young people from activist groups and college campuses, many from Middle East backgrounds, that turned up. They seemed to appreciate the “teach-in” orientation of the speakers who crammed their presentations with facts and context turning the event into more of a course than a political rally.

Personally I would have liked a more colorful and energetic style to inspire the public to get more involved on the issues. More interaction between the jurors and the audience would have been helpful to challenge what, at times, felt like a one-way old-fashioned format.

There were many cameras from alternative media groups like Deep Dish TV present, not the mainstream media, although I did run into one cocky journalist from Rupert Murdoch’s Wall Street Journal who was clearly there to ‘expose’ the tribunal.

I had a short exchange with him. He criticized the event for only having one point of view—although the speakers varied in their approaches. He introduced himself as an Iranian American after denouncing Iran to me for criticizing Israel.

“Classic anti-semitism”, he called the criticisms of Iran.

“Its so one sided”, he said repeatedly.

That was strange coming from a member of the Journal’s Opinion page that is known for being overwhelmingly on the right, as one-sided as they come.

He then baited me out of the blue, asking if I thought Bin Laden was behind 9/11. I said probably, but, added, I believed there is a great deal we still don’t know.

At that, he sneered at me as if I was some kind of denialist or 911 nut and walked away with an all knowing look of superiority. I didn’t get to remind him that President Obama said last week he was sorry they didn’t put Bin Laden on trial.

Personally, my suspicion is that bin Laden was killed, not captured, to prevent just such a trial. Imagine what might have been revealed?

There was a lot revealed about Palestine and the $4.5 billion in US support annually for Israel at this tribunal attended by people from around the world and seen globally via upstream technology.

It is information the American people need to know, but even as the jury huddled to make its recommendations, and even as many of the activists there say that there is new energy in global agitation against Israeli occupation and violations of human rights, American politicians and media continue to ignore one of the most pressing moral issues of our times.

Increasingly, they are not even paying it lip service. 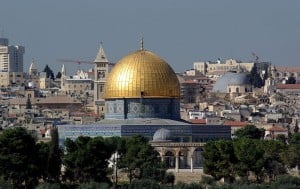 Jerusalem, Dome of the Rock by Berthold Werner (PD)

SME owners are divided on chances of Brexit success

Greek tragedy still playing out but spotlight falls on Italy